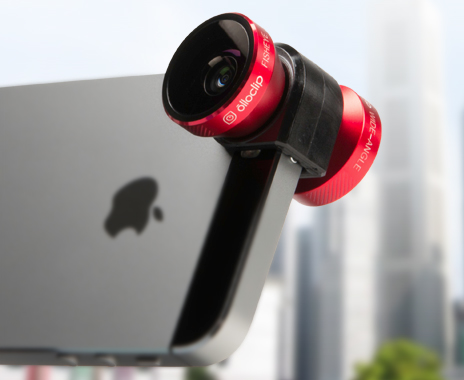 Sales of the iPhone 5s have been pretty astonishing. With the number of iPhones in consumers' hands, it's no surprise that there is a large number of iPhone accessories on the market as well. Everything from bejeweled leather cases to tripod mounts. What interests us, though, is the iPhone accessories that leverage the power of the phone's camera. After all, isn't the iPhone 5s a versatile pocket camera with the ability to make calls and run iOS apps?

There are lots of iPhone accessories on the market to help users take better pictures, whether they're apps or hardware. Olloclip has come out with a clip-on lens that fits the iPhone 5s, as well as older versions of the iPhone and the iPod Touch. The new olloclip 4-in-1 Lens fits over the iPhone 5s lens, adding to its optical capabilities.

The olloclip 4-in-1 lens gives the iPhone 5s camera a fisheye lens, a wide-angle lens, a 10x macro, and a 15x macro. There are other iPhone accessories that slide over the lens and change the camera optics, but the olloclip 4-in-1 gives the user four options in one small package. It's reversible, with optics on each side of the clip, each side has a removable outer lens to allow for the underlying macro lens to be used.

There are many examples of the olloclip in use, their Flickr page is filled with some brilliantly detailed photos. It goes to show that a slight change in optics makes for a different image. Whereas the macro lens options are stunning with the olloclip, it does require some stabilization, though. Unlike the interchangeable lenses of many DSLRs, there is no optical stabilization with the olloclip and an extreme close-up will reveal the movement of even the steadiest hand.