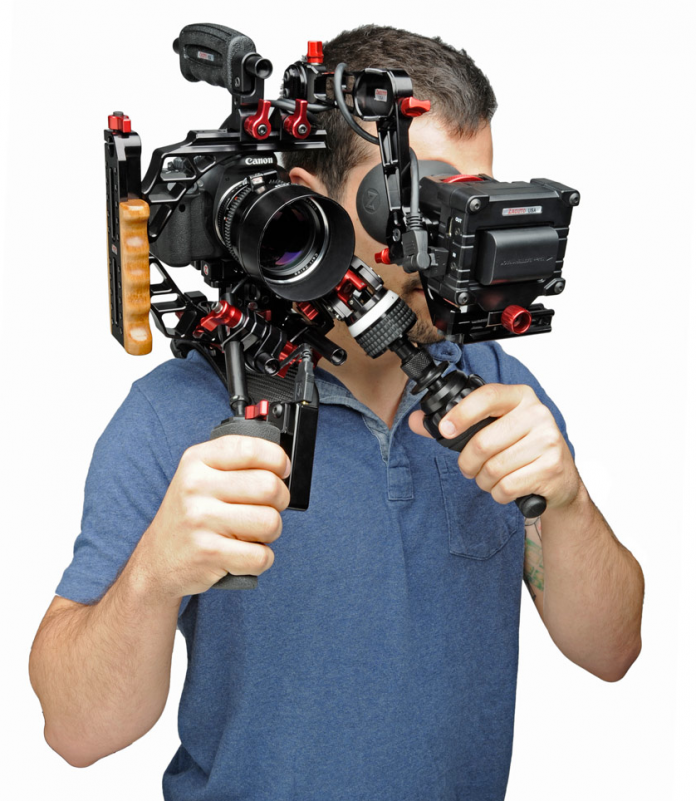 It's easy to play follow the leader, that's why so many follow focus controls for DSLR videography remain the same. The standard follow focus for cinema cameras was on rails, placed on a tripod, and all the manufacturers repeated a proven design. When DSLR videography became popular there was a simple transference of related production gear from the cinema to the world of video. DSLR camera are light weight and a simple shoulder rig makes it easy to transform one into a handheld camera. But have you ever tried to use common follow focus controls on a shoulder mounted DSLR? It's not easy and often requires a camera assistant to move along with the camera operator. Production becomes a clumsy ballet which takes a lot of practice to get the right shot. Zacuto, the manufacturer of production tools for DSLR videography has reinvented the follow focus and the follow focus controller.

The Z-Drive is a direct drive universal follow focus that can be used in a variety of positions, allowing the videographer to use it in multiple set ups. What makes it incredibly useful for DSLR videography is that it can be positioned away from the camera operator's body, and face, allowing them to control it as a one man production crew. The Z-Drive fits on standard 15mm diameter rails and has a dry erase ring to mark distance points for accurate focusing.

The Tornado is an ergonomic handheld follow focus controller that attaches to the Z-Drive's standard whip port.

The Zacuto Z-Drive and Tornado are both sold separately or as part of the Recoil Handgrip Kit. A good shoulder mount with a reliable follow focus control is a standard part of any DSLR videography production tool kit. Zacuto adds a new twist with their redesign of these essential tools. It will be interesting to see who follows them.