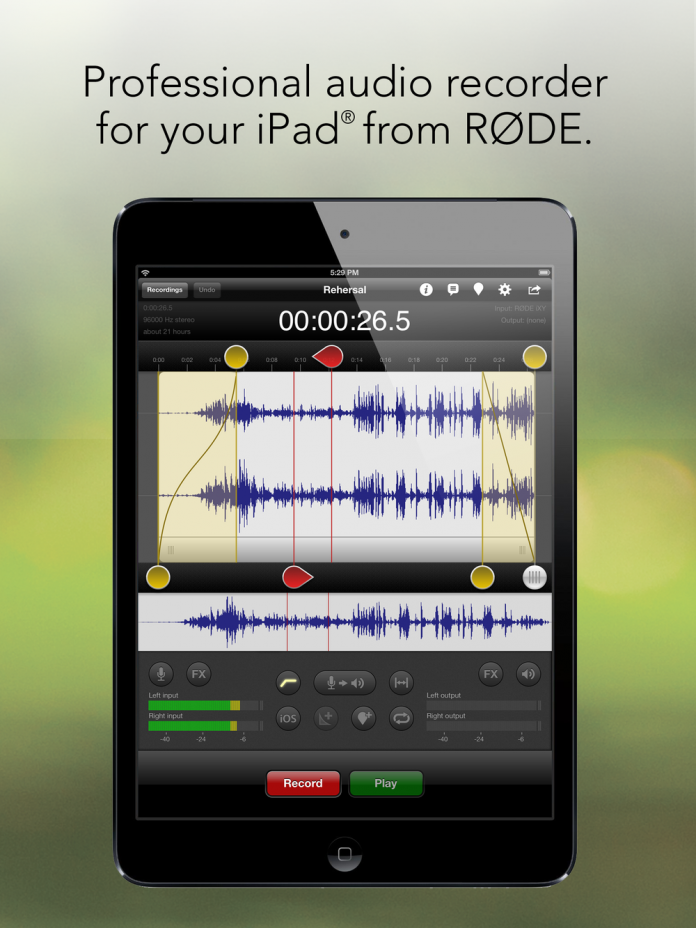 DSLR and mobile device video looks great, but often leaves a void for high quality audio recording. The proliferation of mobile devices, however,  makes this a little easier as we see microphone manufacturer’s developing mic solutions with USB, iOS adapter, and mini-plug connections. This past weekend, RØDE Microphones announced the newest version of its RØDE Rec app for iOS devices. Providing a software solution to the hardware innovations of the microphone manufacturers.

RØDE Rec allows for field recording at 24-bit/96Khz (while using the RØDE iXY stereo microphone). Other mics usable with iOS devices work with RØDE Rec as well. RØDE is working to develop a mobile device field recording platform that rivals the use of dedicated field audio recording devices. A complete audio recording toolset allows users to edit their audio clips in the field before output for use in other applications.

New to this version of RØDE Rec is a dedicated iPad interface, the ability to batch export audio files, MP3 export, and improved interface. The app has a full range of editing tools, recording presets, live input monitoring, powerful EQ tools and controllable dynamics. RØDE Rec doesn’t lock the user into one file format either, the user is able to output to WAV, MP3, AIFF, AAC, and more common file formats. File output can be performed through direct publishing to Soundcloud, upload to Dropbox, FTP, and direct connection to a computer through iTunes or a web browser.

Field recording is something almost every videographer has to tackle at some point. The traditional method of using dedicated field recorders is tried and true, but can be an expensive endeavor. New applications and methodologies, such as the RØDE Rec app, are changing that. The price of RØDE Rec is $5.99 in the Apple App Store. RØDE Rec LE, a free scaled down version of the app is also available. There are multiple options for mics that can be used with an iOS device, including the RØDE smartLav which costs approximately $60 and the RØDE iXY at approximately $199. Field recording doesn’t have to cost what it once did. Mobile devices are providing solutions for video producers.