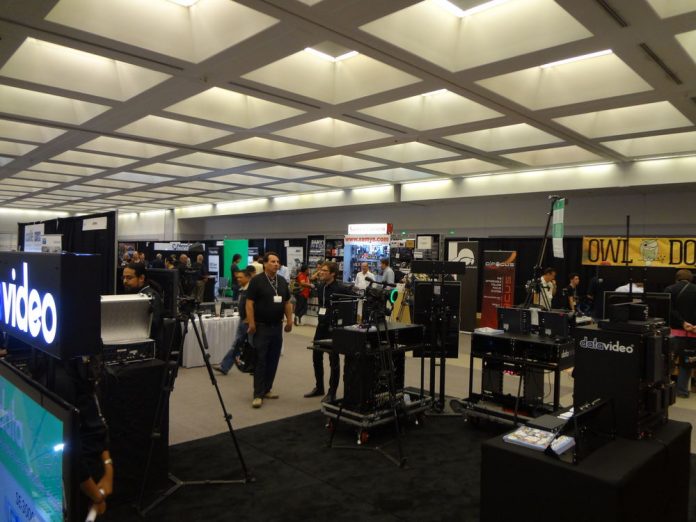 The Digital Video Expo, a bi-annual tradeshow that runs in Los Angeles and New York, just completed at the Los Angeles Convention Center. DV Expo brings the hardware, software, gear and technical storage solutions into the heart and minds of those who will use them, in a venue that showcases the products that are often only found in catalogs.

We love tradeshows; they give us a hands-on look at the gear and the changes in the industry. And while the 50+ conference sessions have a real value for content creation professionals, it’s always at the exhibition hall where the latest and coolest (and yes, useful) tech is going to be found. Here’s three examples of what we found that were worth the price of admission.

For all the talk about the “Cloud,” shooting on location still requires local storage of content — meaning a drive that is durable both in construction as well as function. G-Technology’s G-Drive hard drives’ aluminum design seems to ensure that: I took the 1 Terabyte drives and dropped it on the floor with a “thud” that didn’t show up as a dent or disengage the USB 3.0 interface. The portable drive can be popped into one of the dual bays of the G DOCK ev with Thunderbolt when back at your workstation.

You're seeing them everywhere: Video being shot from drone cams. Being that I like anything remotely related to RC (radio-controlled), I had hoped Freefly would demonstrate low altitude aerial filming, courtesy of their remote-controlled helicopter, right there in the Hall. Of course even with an experienced pilot handling the controls and the onboard stabilization, there wasn’t any way the Fire Marshal would have allowed that. Too bad.

One presentation didn’t take place in the Hall at all, but instead took the stage: Sony’s AnyCast Touch Live Content Producer (AWS-750) combines a touch-screen with “hard” controls in an all-in-one unit that takes the tablet/app combo idea to the nth level: 6-inputs to feed a video switcher and audio mixer that includes external streaming server capabilities. The built-in solid state drive records PGM output in hi-res, has a text generator, controls multiple remote cameras and the screen can be used flat or tilted to access two dual-screens separating the video, audio and menu controls.