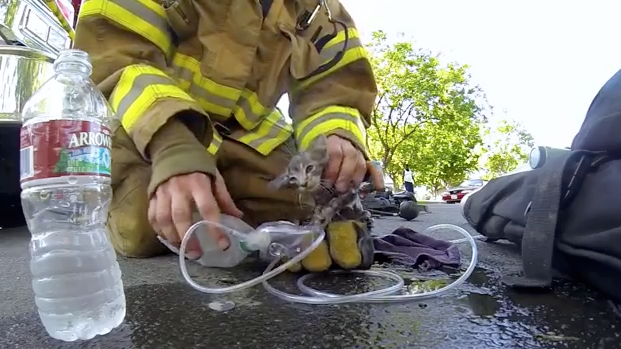 GoPro revolutionized first-person perspective video with it’s HERO line of HD video cameras. It’s common knowledge that the Internet loves cats. And it’s easy to say that firefighters are heroes. All three come together in the latest user generated marketing content video from GoPro. A firefighter saves a kitten and captures it all on the GoPro camera he’s wearing.

There are lessons we can learn from this video and apply to our own video creations, even when if we’re not firefighters or have any cats to record.

This video was made using a GoPro camera without studio lights, a grip truck, or a high-end audio rig. The base GoPro HERO3: White Edition camera retails for $199.99. It’s not expensive. When used to it’s full potential it becomes a wearable, adventure seeking camera, capable of capturing stories that we might otherwise miss.

Watch the video and listen to the audio track. It begins with some establishing sound effects to set the mood: sirens, an emergency response dispatcher, and the breathing of the firefighter in his gear. All three of these sounds set the mood and establish that this is a dangerous situation. Once the firefighter finds the kitten a music bed kicks in, building the emotional tension of the story. The biggest sound effect in the entire piece may be the smallest in nature, when the kitten is revived we hear a small portion of natural sound from the scene and we hear the kitten meow. It’s faint, it’s slightly under the music, and it’s the climatic point of the entire video.

It’s a touching video for sure. The firefighter is a hero and undoubtedly it shows the goodness of people. What’s amazing is that there is a heart tugging human element to this story and we never see the hero’s face, only his hands and results of his work. Keeping with the hidden face, we never hear his voice either. What makes him human is that the story shows him caring for even the smallest of creatures. GoPro knows it’s cameras are small, but it’s the small things that sometimes make the biggest impact.