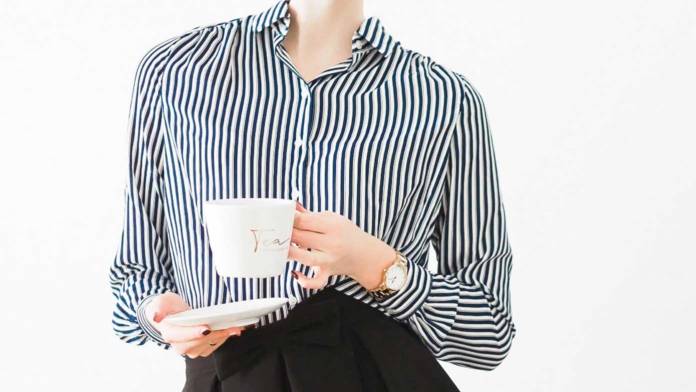 Fred is happy. His shoot is perfectly planned. His set is precisely positioned. His interview questions are ready. The cameras are white balanced, and crisply focused. And his crew is fed and happy, having enjoyed the immaculate spread of snacks that Fred has provided. His guest talent walks through the door exactly on schedule. Everything is perfect… but then, he sees it. Her outfit. It is a disaster. Her wardrobe breaks almost every rule in the video production handbook and Fred’s entire production is ruined because he neglected to tell her what to wear, and what NOT to wear. All of Fred’s careful planning is wasted. Fred is sad.

Does it actually matter what your subjects wear on camera? You bet it does! My friend, don’t let what happened to Fred happen to you. An otherwise perfectly planned production can be tainted by a wacky or unwieldy wardrobe. So grab a Sharpie and write these five naughty no-no’s on the palms of your hands so you can commit them to memory and avoid the problems that plagued poor Fred.

Although things are getting better as technology improves, all types of video are notoriously bad at handling high contrast images. Nothing is worse than a subject wearing jet black or bright white under the hot lights of a set. When you turn on your 500-watt key light and a 250 watt fill that white shirt will glow like the midday sun. As you close down your iris to compensate for the overexposure, the subject’s face will darken. With black the opposite happens. That midnight black suit coat soaks in the light like a charcoal sponge. And when you open your aperture to compensate, the subject’s face blooms. You just can’t win. God bless the wedding videographers who have to deal with brides and grooms dressed in these colors all the time on the most important day of their lives. To avoid this contract conundrum, encourage your talent to wear muted tones in a medium color range. Have them opt for a blue or gray dress shirt, and go for medium browns and off-whites to reduce contrast.

Because of the way NTSC monitors draw the scan lines of your screen, they can have trouble reproducing tight patterns and textures in fabric. On the early days of The Tonight Show, host Johnny Carson often wore houndstooth sport jackets that created miserable moire patterns. I recently advised an editor who had a client complain about compression artifacts in an HD shoot. As we reviewed the footage we discovered it wasn’t compression, it was the subtle pattern in the fabric of the speaker’s sport coat that was to blame, and there was no way to fix it in post. Avoid this one by having your subject wear solid-color clothing without any complex knitting, stitching or texturing.

While a little jewelry can be fashionable, bigtime bling does not play well with video lights. There is a cardinal production principle that says anything that distracts the viewer from the message is a mistake. Big, shiny, reflective buttons, rings, watches, necklaces, earrings, brooches and bracelets will catch your lights and shoot off blinding bursts and fiery flashes that will draw everyone’s attention to the bling, and that’s not a good thing. Reflective accessories of all kinds are particularly horrific on green screen shoots. I recently directed a chromakey shoot on a soundstage in Burbank, CA where the talent showed up on the set with a giant gold anchor stitched to the front of her sailor dress. It reflected the green set around her and, if not caught, would have keyed a gigantic anchor-shaped hole through her mid-section. With a few snips of the scissors, I had the offending object eliminated before we shot and saved everyone a whole lot of post-production heartache.

Just because your subjects’ watches, necklaces, buttons, earrings and bracelets aren’t shiny, doesn’t necessarily mean they are automatically approved. In addition to reflection, you need to be aware of your audio. A piece of jewelry that rattles or jingles will interfere with your sound. Also be aware of any noises made by the clothing itself. This might include the rubbing of corduroy, or the swishing of a sweatsuit (remember George Costanza’s pants?). Listen for wardrobe-related audio problems when you do your soundcheck, and eliminate them before you roll.

A big broadcast no-no is any clothing that shows off a logo or displays a message. In TV land, this is mostly because they make their money by selling advertising, so any logo seen on screen is a freebie for the company it represents. In the non-broadcast video world this isn’t as crucial, but there is still a line of good taste that each producer will need to draw. Unless you are interviewing a NASCAR driver, you probably don’t want your interview subject adorned in logos like, well, a NASCAR driver. The same goes for printed T-shirts with messages. Depending on the type of video you are producing, the shirt that says “I’m with stupid” or “Eat at Ace’s BBQ!” may be inappropriate for a number of reasons. It’s best to keep your talent in clothing that does not act as an ad.

The best advice we can offer is to explain these five simple wardrobe requirements to your talent, and ask them to bring three or four outfit options that you can choose from. You can bet Fred will.