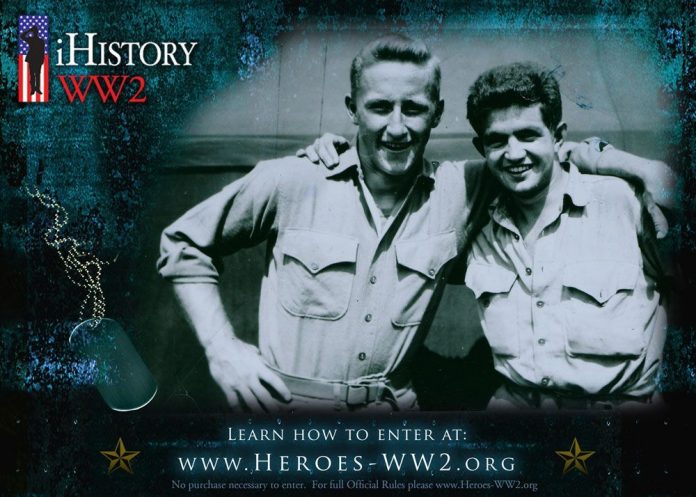 Teen video producers, veterans, schools and the Library of Congress are all winners in this iHistory contest offering Blackmagic cameras for prizes.

To many kids, history is the most boring subject – all those dates to memorize! But the Worthington Foundation is helping to change that by encouraging young filmmakers to embrace living history by interviewing World War 2 veterans, learn about their adventures and let the vets tell their stories; to be forever preserved in the Library of Congress archives.

In this iHistory video contest, all the video interviews will go to the Library of Congress' Veteran's History Project, then the entrants are encouraged to expand the interviews with free resources like World War 2 footage and music from the iHistory website to compete for prizes in excellence in editing and creative storytelling. The grand prize winner and the winner's school will each receive a Blackmagic Cinema Camera with a Rokinon 35mm T1.5 Cine Lens. Winners for best story and best editing receive a Blackmagic Pocket Cinema Camera with a Panasonix Lumix f/1.7 G-Series Lens. Second and third prize winners receive a bundled lighting, audio and tripod kit.

Eligibility rules state the contest is for aspiring young filmmakers in the U.S. between the 13 and 18 years old who are enrolled in Junior High or High School or an accredited Home Schooling program.

[image:blog_post:33775]To help the young filmmakers learn to make better video and to encourage the teens to continue in their passion for creating video and bringing history to life, Videomaker has also gotten involved in the ihistory World War 2 project. The first 100 eligible entrys will receive a one year subscription to Videomaker magazine, one of Videomaker's instructional DVD downloads as well as a 14 day free trial membership to the Videomaker Plus Membership.

The era during World War 2 was an incredible time for the entire planet encompassing numerous years with more than 100 million people serving in military units from 30 countries worldwide. Each year thousands of our veterans pass on without anyone – even their own spouses and children, knowing about their experiences and encounters of that turbulent time.

Videomaker has enlisted readers to become involved in the Library of Congress' Veteran's History Project before, and the iHistory World War 2 project sponsored by the Worthington Foundation, brings even more incentive for young people to get to know the vets in their community, sit down and learn from them… in a way no books could ever do, and earn prizes to boot.

[image:blog_post:33774]Even if you're not eligible to win a coveted Blackmagic cinema camera, video producers have a skill and talent that many people don't – the Veteran's History Project is a worthy project for anyone to get involved in, not just for young people looking for a prize.

To learn more about elegibility for the iHistory World War 2 video contest, read the following press release for details on entering and qualifying for the contest. The contest starts August 19 and runs through November 20 with winners announced in February.

To get a jump on the competition, learn how judges view your contest entries to give you a better handle on winning video and film contests, with these Videomaker tips on impressing the judges and gettting your video contest entry noticed.