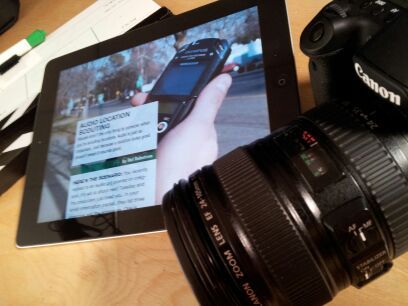 One of the best things about the tools of the video trade getting smaller is the portability for run and gun shooters. Nowadays, even a tablet can be your go-to studio-in-hand for planning, shooting, editing and collaboration — anywhere, anytime, with anyone.

The one thing that never ceases to amaze me in the 30+ year’s I’ve worked in broadcasting is how much smaller and less expensive equipment becomes. The things we can do on our home computers today, took a room full of equipment and $100,000 in the 1980s, when I started my career and when Videomaker was first launched.

Today, I have a full production kit that fits in a backpack that includes my DSLR with extra batteries and lenses, surround sound audio recorder and my Swiss Army Knife – an iPad mini.

Why call it  a Swiss Army Knife? Because it's small, lightweight and has all kinds of handy tools. Most of us know the iPad mini has a 5 MP still camera and shoots full HD video in 1080p and could serve as a backup camera. But what we’re looking at today are the apps: those programs to download to add "tools" for the video producer to your tablet. The following are a few of my favorite apps and how I use them:

This is the one production app that gets the most use for me. Pinnacle is a video editing program that works like what I'm already used to.

Unlike other editors, that are designed for consumers, this one has frame accurate editing, more control over audio tracks, a quick and easy titling function and user defined pan and zoom for importing stills. Check out a full review of the Pinnacle for iPad here.

A recent project required using a number of stills intercut with moving video. It worked perfectly for me to sit in my easy chair and create some pans and zooms with the stills while my editor (my wife, Peggy,) worked on the video. I was able to put my finished video into Drop Box and she brought everything together.

It's important to note that you can import video directly from your camera using Apple's Lightning to USB Camera Adapter or, as I do it, directly from SD Card with the Lightning to SD Card Reader. The video has to be H.264 or MPEG. For some other tips on importing your video check out the Videomaker articleGetting your Video to your Smart Device in Three Steps.

Oh sure, there are bigger and better tools for scriptwriting, but this one is just so convenient and it gets the job done.

I've actually been using this tool before the iPad was introduced. I got it for my iPod Touch and it was my pocket writing tablet. This script app allows you to write in the standard format that includes an extra row of tools at the top for scene, action, dialogue, parenthetical, etc. It remembers your scenes and characters so you don't have to retype the same thing over and over.  For a review of this desktop software check out this Videomaker article.

Maybe the one feature that makes it so versatile is that the program allows you to share your script across other platforms. You can start writing on your iPad at the coffee house and go back to your home or office to finish it up. You can save then email your script in PDF or text format.

This is the tool that seems really handy. I've played around with it quite a bit but have not yet put it to use in a real world situation. CELTX Shots is a story boarding app that will tie in with the script app. I can't draw very well and I really like that this one can import a picture from the camera or simply snap one on the fly.

The real value in this app is that, connected with each frame of the storyboard is a second image for the crew. You can use the pre made images of cameras lights and people to map out the shot before you ever get out in the real world. I can see myself using this to create shooting plans and printing up a copy or even doing up a quick map for the crew on location.

this one is just a fun app but I have not yet used it in a real production. 8mm is a app that allows you to shoot live or use existing footage and make it look like vintage film.

There are, at the writing of this, 9 different looks from 1920s, 1960s, Noir, X-pro, etc. They have different levels of film grain and different hues to give it the right feel. There's even a manual frame jitter button that makes the image "jump" like an image slipping in the projector.

There are many more apps geared to making the video production world just a bit aasier to manage using only an iPad or similar tablet. These products are just the tip of the proverbial tablet app iceberg. Videomaker is researching these apps and more, and will have full reports and some review in the next coming months.

The Swiss Army knife was invented in 1884 by Karl Elsener. According to the company's web site it was designed to give Swiss soldiers "a compact and sturdy knife, which offered many functions combined in a single tool." That is exactly what the iPad mini has become for me. It is a compact designed that offers lots of great tools. It is so versatile that I wrote this article in Pages entirely on the iPad mini. Tablets for producers – the video world just got a bit easier to handle.