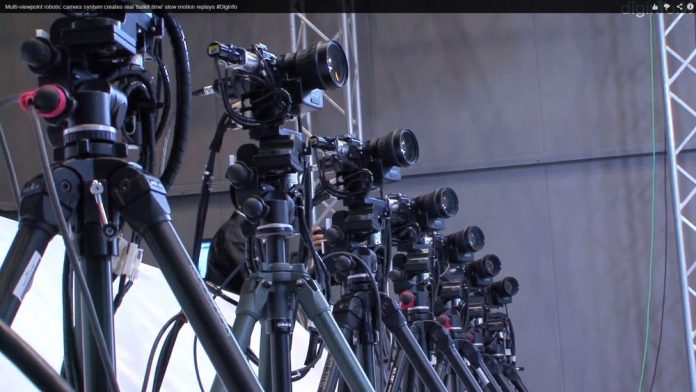 The Matrix is one of the most visually unique movies of all time, but that was 14 years ago. Now, be on the look out for bullet-time shots in sports and more. Who wouldn't be cool acting like Neo and Trinity? It seems that ever since the 1999 debut of The Matrix, no one has really developed similar effects, until recently (see this video).

Japan's NHK is developing a system of cameras that are linked to a single camera, allowing for panning and tilting with eight subcameras. The resulting effect is great imagery. For the scenes in The Matrix, many cameras were precisely positioned and timed for capture of a controlled instance. NHK's system will allow a single controller to adjust to the action, wherever it may be. Thus, a camera crew at a stadium or arena can capture a crucial play, with a smooth look from more camera angles. The applications are mainly being developed for sports. And why not, considering the loads of discussion on replays in sports? (See MLB umpires and NFL referee situations in this season and last.) And for those that may not care for football or any other sport, recall that major sports are often innovators of camera technology.

The real news is that folks are figuring out very good systems that imitate The Matrix, and in very conceivable ways. The effects of such slow-motion are barely being tapped into (even with this slow-motion video). Just about every object in motion is going to be good for slow-motion camera effects; though, it feels like we practically dug up effects from 1999 for this news. Perhaps there are a few other old effects that will translate well into 2013 and beyond.