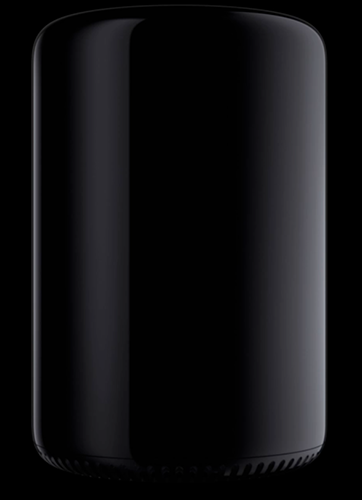 Each year, Apple’s Worldwide Developers Conference (WWDC) shows off the latest in Apple hardware and software updates, cool refreshes, and puts to rest a year or two worth of rumors. Gaining in popularity year over year, the annual conference sold out in just two minutes which was a WWDC record.
This year at the annual conference things were no different, with Apple showing off iOS 7 and OS X Mavericks, updates to many native apps, a Macbook Air update, and a preview many of us have been anticipating for more than a year, an updated Mac Pro.

On the mobile front, iOS 7 hit the ground at WWDC running with a new design, and some useful new features. Upgrades to iOS native apps include notifications, Photos, Siri and Airdrop, along with several others. New features such as true multitasking and Control Center make iOS 7 the biggest mobile software announcement since the launch of the iPhone. The annual conference was abuzz after the iOS announcements, but there was more to come.
OS X has left the big cats behind in favor of their favorite surf spots, with the next iteration being called OS X Mavericks. OS X Mavericks contains some brilliant new multiscreen features, as well as a number of upgrades to native apps from iBooks to Safari.
The Macbook Air family received a nice refresh as well at WWDC this year, upping battery life to 9 hours for the 11-inch model and 12 hours for the 13-incher. Toss in some updates to their processors, faster flash storage, and this makes for a Macbook Air upgrade worthy of the world’s best ultrabook.
[image:blog_post:33211]Ok, iOS 7, OS X Mavericks, and the Macbook Air are great, but the talk of WWDC this year for video was the new Mac Pro.
The Mac Pro has historically been Apple’s top-of-the-line powerhouse desktop. For many of us, the Mac Pro represents Apple’s one truly upgradeable computer. While some people are comfortable managing 80 tiny screws, clips, and other parts that may or may not fit back into place to upgrade a Macbook Pro, up until now the Mac Pro has been the only Apple designed for simple upgrades.
[image:blog_post:33213]With four hard drive bays (and an option to toss a fifth in the second optical drive bay), slots for eight RAM modules, and a slew of PCIe slots, a decent Mac Pro could be made to handle professional work for a few years at a time with simple upgrades.

How the Desktop Mac Pro Holds Up

So what did we learn at the annual conference about this new Mac Pro? Will it meet the needs of pros for the foreseeable future? Is it the devastating powerhouse of rendering destruction the current 12-core Mac Pro is? Can we upgrade the darn thing? Well, yes, yes and kinda, it looks like. The new Mac Pro looks to be pretty capable, exceptional in some areas, and “we’ll have to wait and see” in others.
[image:blog_post:33212]In the exceptional department the design has to be a consideration. Going beyond Apple’s usual simple beauty, they have crafted an astonishing feat of design and engineering with the new Mac Pro. Apple has jammed processors, memory, storage, graphics, and the rest of it into a canister shaped device that barely stands as tall as the power button on current Mac Pros.
[image:blog_post:33214]To manage the heat in this canister, Apple's engineers rethought the entire desktop architecture to create a unique cooling system, with a fan at the top of the device pulling air in from bottom vents through the tightly-packed components, just like a wind tunnel. The rest of the heat is conducted away from the CPUs and GPUs by a unified thermal core, made from a single piece of extruded aluminum.
From a processing perspective the CPUs have gotten a bump to the new Xeon E5 chipset up to 12 cores. From these we can expect double the processing performance of our existing towers.
Memory resides in four slots — down from eight — but with twice the memory bandwidth of the current Mac Pro we should still see a significant improvement. Just expect to pay more for big memory numbers, as 8GB modules and up tend to get pretty expensive.

One area where there will undoubtedly be massive improvement is in the graphics card department. The new Mac Pro is going to be available with an option for two 6GB AMD FirePro GPUs. This sounds like great news for the most part — support for 4K monitors (3 of them), bragging rights over your gamer friends — but with many of us making the switch to Adobe for editing and post production software, will the cards be supported to take advantage of the Mercury Playback Engine? It looks like they will. Adobe has worked hard over the last version or so to ensure that the MPE doesn’t only take advantage of NVIDIA’s CUDA technology, but also the technology used by AMD, OpenCL. Stay tuned on that one.
Even with these great additions – dual Gigabit Ethernet, HDMI 1.4, Thunderbolt 2.0 with DisplayPort 1.2 support for up to three 4K displays, 1866MHz ECC RAM,  802.11ac wireless, Bluetooth 4.0, PCIe-based flash storage, and dual AMD FirePro GPUs with up to 6GB of VRAM – there are some drawbacks. Drawbacks with this new machine look to be primarily in the area of expansion. While there might be an option to swap out the flash storage, it won’t be an easy one. A single drive down from four easy-to-swap bays seems limiting. Half of the memory slots is also worrying. The outputs have improved — 4 USB 3.0 ports, 6 Thunderbolt 2 ports, an HDMI out and a few others — but they still don’t replace the speed and flexibility of internal PCIe slots. And while the addition of HDMI is great, only 4 USB ports — USB 3.0 or otherwise — seems pretty low.
WWDC showed us quite a bit, but did the annual conference live up to the hype? Oh yes. This Mac Pro appears to be a major step forward in a few key areas, but will the innovative new design lead to a desk full of peripherals to make up for a tower full of goodies? We’ll have to wait until later this year to find out for sure.
Russel Fairley, an Apple guy, owns a turnkey video production company presenting 200+ videos a year, featuring web videos, television commercials, and live event coverage.