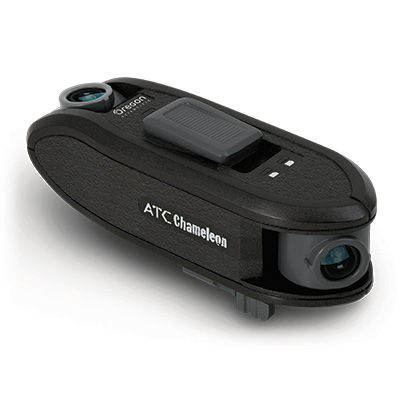 If you thought a camera with two lenses is only for 3D, then you'd be as surprised as we were when we heard of the ATC Chameleon action camera. It has two lenses that shoot two videos simultaneously (in sync) and that can be independently positioned to shoot from different angles.

With a lightweight design the two built-in wide-angle lenses shoot video with a field of vision (FOV) of 170 degrees and a resolution of 1280×720 pixels at 30 frames per second. It has a built-in rechargeable battery for up to two hours of continuous recording, a built-in microphone and speaker, a micro SD card slot that supports up to 32 Gb and a mounting systems for most hard surfaces (helmets, bikes, kayaks and more).

To better visualize how this camera works let’s examine the following picture:

You mount the camera on a hard surface (in this example the kayak) and adjust the two lenses to the angle you want. In the picture above the front camera is shooting the front of the kayak giving the viewer a closeup and personal shot of the action, while the back camera is shooting the boater as he experiences his wild ride. Since the camera is splash proof you won't need to worry about water damage. Both videos are in sync eliminating the need of fancy editing later.

The ATC Chameleon is currently available at Target, Best Buy, Costco, and at the Oregon Scientific store for a suggested retail price of $199.99.