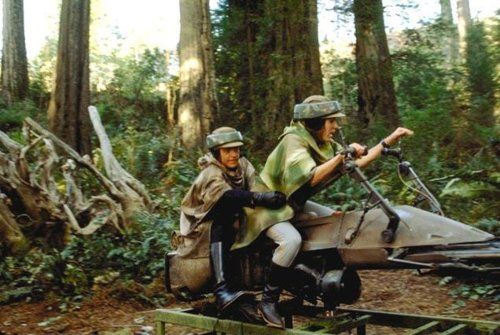 There's probably not a single person on earth who has watched at least one movie and hasn't seen his work, or an imitation of his technique. Garrett Brown, the inventor of the Steadicam, is getting inducted into the National Inventor's Hall of Fame for his work in the galactic empire world of movie making.

Steadicam, now owned by the Tiffen company, has become such a ubiquitous word, that people associate all sorts of body-worn or hand-held camera stabilizers with the name, but the original was invented by the man who made speeders race in Star Wars: Return of the Jedi and followed Sylvester Stallone all over Philadelphia in Rocky.

Brown made the famous speeder chase in Star Wars: Return of the Jedi by strapping on the three-part sled, vest and arm Steadicam device (with camera, of course!) and simply taking a slow leisurely stroll through the most magnificent old growth woods in Northern California. He shot film at one frame-per-second and when the footage was played back at 24fps the motion was 24 times faster and was remarkably smooth, thanks to his invention. Just bluescreen in the actors, speeders and explosions, and you have one of the most famous chase scenes in moviedom, and, at the time, the most awesome ever.

It's hard to imagine movies back then, but before Garrett Brown's invention that freed up camera operators from the confines of riggings, tracks and bulky tripod and dolly systems, movies were shot from a stationary location, with only a pan, or sweeping crane shot to enhance the story – there were no camera stabilizers, and cameras were too heavy to go hand-held. Then, movies enlisted the viewer to be observers, but the Steadicam helped immerse the viewers into the action, engaging the audience in a way never done before. And it was mind-boggling back then.

Garrett Brown began working on stabilizers in the early 1970s. He owns 50 patents for many devices, including the Steadicam junior and stabilizers for today's smaller cameras and even mobile phones. One such invention is the Skycam, the flying cabled-camera device that you see at nearly every large sporting event from Monday Night Football to The Olympics and more.

In an interview that aired this week on NPR, Brown said he always wanted to make this impossible camera ability possible.

"We have a stabilizer in our heads if you think about it," he said, "you're not conscious of yourself lurching side to side when you walk, the brain just smoothes it all out for you," and he wanted to make that same smooth look come from a camera. "Why should it look worse when you just pick up a camera and walk…" that problem lured him in to trying to figure out how to make the Steadicam. "I had big ones and fat ones and heavy ones and ones that were so burdensome that this could never work. No one in his right mind – except a masochist, would run around with this thing." But he was persistent, and locked himself in a motel room to work on it, "confounding the maids", he said by running down the halls balancing broomsticks on his fingers.

He then shot short scenes using his device, and showed the shots around Hollywood, without showing how they were made and he got the attention of several notable directors like Stanley Kubrick. He showed a reel of his girlfriend running down some steps in Philadelphia then back up to director John Avildsen, who was working on Rocky.  Brown says Avildsen said "how did you do that…and where are those steps…?" which led to him working on the scene, chasing Sylvester Stallone up those same steps and a new movie history technique was born.

The U.S. Patent and Trademark Office states: " The National Inventors Hall of Fame annually accepts nominations for men and women whose work has changed society and improved the quality of life. The candidate’s invention must be covered by a U.S. patent, and the work must have had a major impact on society, the public welfare, and the progress of science and the useful arts."

As a tool for useful art, from simply walking to running up steps or stealthily stalking, today, Brown's invention, techniques and other stabilizers are used on nearly every movie produced and proves that handheld camera work DOES look cool, if you do it right and use the right gear. Congratulations to Garret Brown and Steadicam for the induction.

Watch our interview with Garrett Brown at NAB 2010 talking about "Tango", a boom-arm that attaches to the Steadicam for some hand-held crane shots.