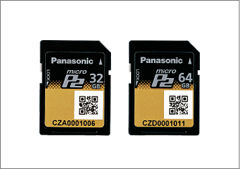 Panasonic resizes the P2 card to a microP2 card, and is not to be confused with SD media cards, even if they're now the same size. These microP2 cards may remind you of their same-size relatives the SDXC card, this time with two capacities at 32GB and 64GB. Panasonic creates these with the broadcaster in mind, the type of shooter that goes into harsh environments of negative 4-degrees F and 140-degrees F areas. The durability test concludes with 1,500G impacts and vibration. Panasonic's microP2 cards may then push the workflow along by immediately making proxy versions for offline editing. And many videographers will tell you that editing can be one of the most time consuming elements, so getting rid of the digitizing or ingesting step is a nice benefit. If that doesn't help speed you up than solid state memory should. There's a feel good aspect here too, with no parts there's less to replace and less power being used.

You've got to appreciate the backwards compatibility with such specialized products and so, there's a P2 adapter for all the equipment that still requires a standard-size P2 card. Also, there was no sacrifice of speed, the microP2 cards maintain 2.0Gb/s just like UHS-II SD cards. Having a QR code on the card's front is a quick way to help management and may be the most unique feature on this form of blank media. The new cost-efficient cards will be available starting this month and more compatibility by August 2013.