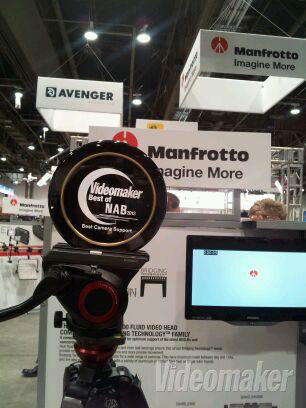 Videomaker's Best Support of NAB 2013 is the Manfrotto 500 Fluid Head.

Manfrotto wants better balance and control with the 500 Fluid Head. The MVH500A 60mm halfball and the MVH500AH flat base both feature a wide base to match the wider base of DSLRs. The plate will also help your adjustments for depending on the length of your attached lens. There are two separate fluid cartridges to provide smooth and precise control of camera packages weighing up to 11lb. The counterbalance is set to 5.3lb. The release for the plate takes is one step to unlock and allows for the camera to be removed upward from the tripod. The MVH500A and MVH500AH have an Easy Link 3/8-inch connector for attaching an accessory. The sturdiness of the MVH500A and MVH500AH fluid heads is complimented with aluminum construction, and they cost $200 and $190 respectively for the head only.