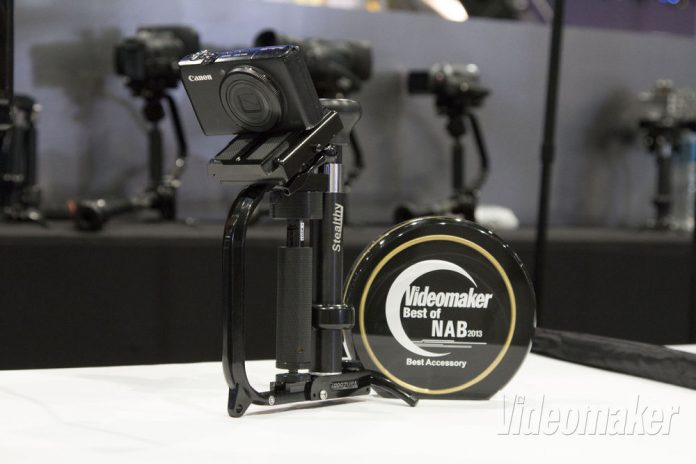 Videomaker's Best Accessory of NAB 2013 is the VariZoom Stealthy.

The VariZoom Stealthy could really be called the versatile – it is really designed to meet many different needs. As a handheld stabilizer your camera can float with the Stealthy with the counterweight mainly coming from the length of the leg directly below the camera. A second handheld mode curls that same leg up to rest directly behind the camera. From there you might try the 3-point shooter in which one leg rests against your mid-section and you use two hands. By connecting the gimbaled handle to the straightened leg you create a monopod that can also be combined with an extension. From there you may also go hands off and configure the leg into the long leg of a tabletop tripod. The Stealthy weighs less than 2lb. and can carry cameras up to 3lb. with optional support for 5lb. cameras. VariZoom wants your camera support to be truly Stealthy, so the compact handheld configuration can also be attached to a belt for quick-draw shooting.  Take a look at the stealthy demo we got at NAB 2013