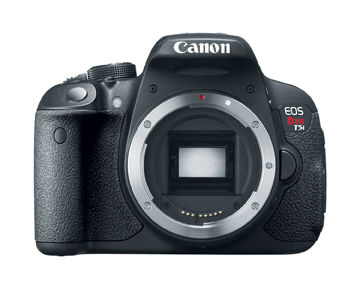 Canon releases the EOS Rebel T5i with a new kit lens featuring stepping motor technology. First questions first, will you be crossgrading from Nikon for this camera? Probably not. Might you update your EOS Rebel T4i? Only if you'd like the insignia to advance one digit, however, if you are looking for a new DSLR with exceptional quality and functionality from a trusted manufacturer, the EOS Rebel T5i is an excellent choice.

While a couple of Canon's other products emphasize size, like the EOS M and EOS Rebel SL1, the EOS Rebel T5i features compatibility with an EF-S 18-55mm f/3.5-5.6 IS STM lens. The stepping motor allows autofocus to be silent during recording, this is one reason we guard against autofocus while shooting, so check our other reasons before relying on a camera's automatic functions. Many key characteristics in the consistently competitive Rebel lineup continue their roles as the DIGIC 5 Image processor, an 18 megapixel CMOS sensor, multiple AF technologies, a 3-inch articulating LCD touch screen and a host of recording formats.

A few elements that we especially appreciate in the EOS Rebel T5i and Canon's EOS band of rebels are manual audio control, the flexible touch screen and a wide range of usability. As far as kits go, $200 less is a nice tradeoff, even if it is found mainly in the difference between the 18-55mm lens and 18-135mm STM lens. This difference in kit offerings does appear to be the only change between the EOS Rebel T5i and the EOS Rebel T4i. All the things you've heard about the T4i should still be worth testing, and at the bottom line, more of a great thing should be good – it'll take a T10i before there's too many Rebels.