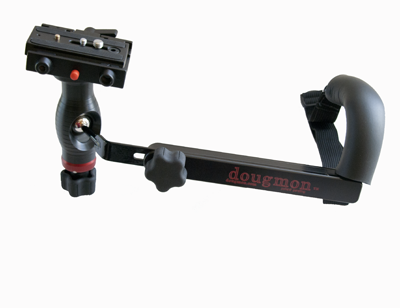 Doug Monroe developed the Dougmon for nine years. The mobility of a small camera is aimed at providing more axes of movement than a camera mounted on a shoulder. The design is meant to reduce fatigue on the user with a brace and pad extending from the hand to either side of the elbow. Monroe makes a great point about camcorders being crafted for right-handed users with buttons opposite the right hand, until this changes, the Dougmon will predominantly be used on a person's right arm.

The Dougmon can convert into a monopod and be combined with a Slingmon for more camera support options. The 577 style release plate brings the Dougmon to 28.5 oz. and can handle cameras as heavy as 5.5 lb. It'll take some comparing to other rigs, and at $540 the Dougmon fits in the same neighborhood.