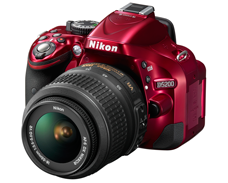 The D5200 from Nikon is an all-star team of features in one DSLR from a company that has had great success with its cameras. Although the model number continues to change, the features should be recognizable for Nikon users. You just might not have seen them all in one body.

The side-tilting LCD screen is present throughout the D5000 line, and we enjoy it, but before diving further into the form of the D5200, let's look into what we don't see. Quite a paradox, no? The EXPEED 3 image-processing engine is the same as that which is found in the Nikon D800 and D4 – both are classes ahead of the D5200. This engine allows for great color reproduction and detail as well as the processing of massive 24 megapixel imagery. The speed of the engine helps reduce noise and moire. The range of ISO is 100-6400 with two expanded settings as great as 25600. The 2,160 pixel RGB sensor, as found in the D600 and D7000, boosts the auto white balance capability and makes it possible for the auto focus to examine 35 faces, now that might really help those unavoidable family gathering photos.

Now for some specs on things you can see on the D5200, the audio level meters can be found in the menu, but will still be helpful when you use the 1/8-inch microphone input, and if you're not using that, at least you can take advantage of the mic on top of the camera, which is as good a spot as any for a built-in mic. The audio levels appear to be on screen while you record, so that makes them useful, but what should be very useful is the new graphical interface showing your exposure controls. As you open and close the aperture, you'll see a representation of the blades opening and closing along with a clear number as well. We continue the visual parade with the seven effects that you can try before you record, that'll make editing just a step easier since you're able to preview way before you come to post-production.

Let's not forget some of the other notable features that Nikon included in the D5200, the ability to use a wireless remote and communicate with smart devices, five frames per second still shooting and a 39 point AF that can track faces while recording video.

Also, in case you were wondering, the D5200 body comes in black, red or bronze, accepts SD cards, and fits with Nikon F mount lenses. The pricing is a little up in the air, but we've seen numbers a little greater than $1,000 for the body alone.