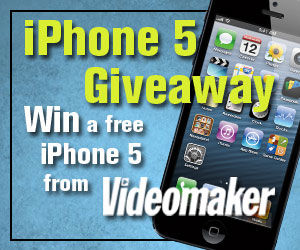 The iPhone sweepstakes concluded recently and a winner has been chosen.  Congratulations to winner George Alger!

George is veteran sales/marketing technologist and the principle of his own digital advertising agency, Skyworks Marketing.  He's also the producer of a community TV series Our Ventura TV that airs weekly on local cable channel 6 in Ventura, California.  The series looks at people doing good things in Ventura County." Guests include artists, musicians, business Leaders, educators, students and city officials.  Additionally, he is president of a local arts group and also a passionate motorcyclist — he's cycled coast-to-coast about a half dozen times and intends to do so again in the future.

Congratulations to George, winner of the second Videomaker sweepstakes! But don't worry; we've got plenty more giveaways planned for the future, so you'll still have more chances to win. Right now, we've already begun our next contest. We're giving away a Go Pro Hero 3 Camera, black edition.  The HERO3: Black Edition is the most advanced GoPro, described by GoPro to be 30% smaller, 25% lighter and twice as powerful as any previous model. The camera is waterproof to 60m, can shoot ultra-wide 4k 12fps,1440p 48fps, 1080p 60 fps and 720p 120 fps video and 12MP photos at a rate of 30 photos per second. It has built-in Wi-Fi, GoPro App compatibility and included Wi-Fi remote  To enter, visit the Videomaker sweepstakes site.