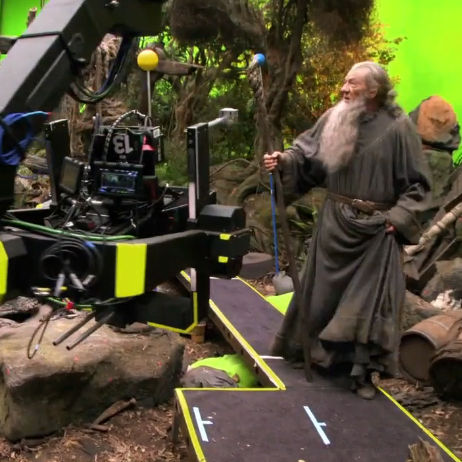 If you're a fan of Peter Jackson on facebook, then you know he has been blogging about The Hobbit every now and then. In a recent post he talks about some of the gear and techniques used to shoot The Hobbit. For most of us, buying one camera and a lens or an edit system is a big decision. Imagine having an astronomical budget to produce your next project. Here's a list of 68 things you'd need to produce a project like The Hobbit

That's right, while we're all saving our pennies to get one RED EPIC camera, Peter Jackson has 48 of them, and that says nothing about the number of lens options he probably has at his disposal. It also doesn't account for what is probably an obscene number of 128gb REDMAG memory cards to shoot on.

When one rig with two RED EPIC cameras configured to shoot 3D just won't cut it, you'll need 17 specially designed camera rigs built to suit all your needs. The rigs have a mirror system to allow the huge lenses to move closer together in order to approximate the way our own eyes see the world. Whether it's crane shots, Steadicam, or handheld, they've got a rig for every situation.

#66. The Ability to Manipulate Interoccular Distance and Covergence Point.

Shooting static 3D is so old school. The interoccular distance is the space that separates the two cameras, and the Convergence Point is the screen plane. The camera rigs used on The Hobbit can actively change these while shooting to enhance the use of 3D for artistic effect

If you're producing your first movie, it's highly doubtful that you could convince the studio that 48 frames per second is the wave of the future. Being a fan of the 24p look, I certainly have my doubts. But Peter Jackson is boldy going forward, and is convinced he'll make us all believers. He says people who have seen it say it looks like the movie screen has been cut out, and that it feels like you're looking into the real world.

Some of us are still working on systems that struggle with High Definition footage. Imagine trying to edit stereoscopic 5k RED footage at 48 fps. I'd love to see the specs on that system!

The next time you fire up your camcorder or DSLR with it's stock lens, don't beat yourself up if you're project doesn't come out looking like The Hobbit. We've all got to start somewhere, and at least we know what to put on our wishlist!