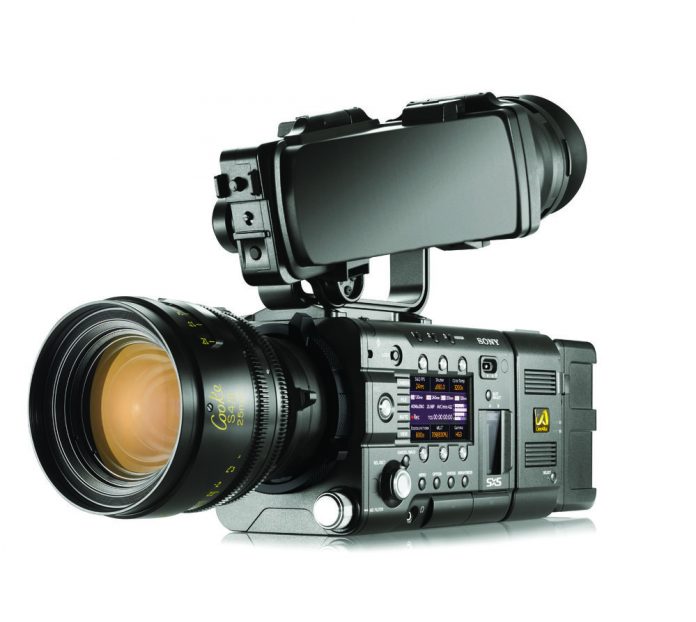 The PMW-F5 and PMW-F55 are due in February of 2013, in case you were wondering. Now what's so exciting about these new CineAlta cameras, well, as the steps between the PMW-F3 ($16,000) and F65 (a small house), the "fives" we see here should be two solid steps forward. Though we don't have word on pricing yet, the features are more than enough to garner some attention. Anytime that a camera line gets multiple cameras with a form factor change is a big deal.

A couple of the reasons for the body transformation are due in part to the power and recording options, but first, let's see what we're dealing with. Logically, the F5 is smaller than the F55, but it also looks to be as small if not smaller than the FS100. The body resembles a brick which simply carries a lens on the front with a handle on top, attached to this handle is a revamped monitoring system that allows for a 7-inch monitor, 10x contrast viewfinder, or a 1280×720 EVF.

When it comes to shooting, the F55 and F5 have pro features to spare with numerous recording formats, most notably, a 4K Super 35mm image sensor allowing for 4096×2160 resolution video. There is a maximum of 120fps and 240fps at 2K RAW for the F5 and F55 respectively. With all the action you can capture with those frames per second, you might be eccstatic to find a global shutter in the F55. With the whole sensor taking in information with the global shutter's subjects are less likely to get skewed in fast action or quick camera moves. For making use of the gear you already own, an adapter for PL lenses is included and can also be made to accept Canon, Nikon and Leica lenses, all in addition to Sony's FZ-mount auto zoom lenses.

Both the F55 and F5 can record to side by side PRO+ memory cards or to an AXS-R5 RAW recorder, the cards will insert directly into the camera while the AXS-R5 keeps the system smooth by attaching directly to the camera.  Did we mention that there's an optional shoulder mount, how many other cameras boast that kind of form factor flexibility? For power, the BP-FL75 battery uses olivine, a lithium iron phosphate which should charge faster than lithium ion batteries and last for 150 minutes.

The F5 is likely to be the more reasonably priced between the two, even if we're looking at cameras priced greater than our review range – both will be exciting to watch with their capability for cinema shooting.