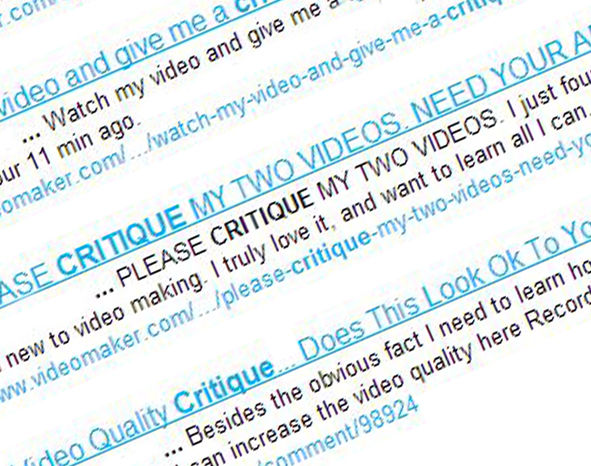 I pride myself on having a thick skin. When I submit a project for review, I expect changes, I expect constructive criticism, and I also expect to disagree with some of that criticism. I can honestly say I am a much better shooter, editor, and all around producer because of the constructive criticism I've received. The Videomaker Forums are filled with requests to critique someone's work. Unfortunately, in today's web culture, it's fashionable to criticize without any real attempt at being constructive. So when I’m in the position to critique someone's work, I have a few questions I always ask myself.

It's easy to spot problems with a project, but being able to provide an idea that solves the issue is far more effective than telling somebody to just “do something else”. Suggesting a potential solution provides a positive starting point for discussing what changes could fix an issue.

It's hard to judge somebody's work without instinctively trying to modify it to be more like your own. Maybe you don't prefer a certain color scheme, or you don't care for handheld camera work, and your own predisposition is affecting your judgment of somebody else's work. It's important to give an artist the space to express their own style. The real trick is learning the difference between a stylistic choice you're not fond of, and a mistake that just doesn't communicate an idea effectively.

Question #3 – How Big is the Bang for the Buck?

Most of us don't have an infinite amount of time to finish a project. And it's important to prioritize your workflow and learn the difference between small changes that make a big difference, and time-consuming changes that hardly anyone will notice. Sometimes, simply color correcting a couple shots or changing the volume level of the music in a piece might make it more cohesive as a whole. Conversely, changing the music selection could result in a total re-edit, and may not be feasible if you're on a tight deadline.

More important than time constraints and artistic freedom is the professional integrity of the work. So ask yourself, does this issue cause the project to fall below my professional standard? If the answer is yes, then you've got to find a solution, even if it means late nights and early mornings. After all, if you're not proud of the project, what's the point in putting it out there for the world to see?

Asking these questions can help ensure that the criticism you're giving stays constructive and realistic. Believe me, the artist will appreciate it.