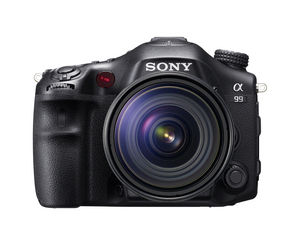 The Sony SLT-A99V gives you a new mark for quality imaging. If you don't like the middle ground of consumer and professional cameras, you're going to hate Sony's full-frame Translucent Mirror camera. There are so many features about the ?99 that pros want, like an OLED 100 percent viewfinder and a tilting 1,229,000 dot LCD with WhiteMagic to boost brightness.

Audio is slowly becoming less of a sore spot with DSLRs because the ?99 provides a display of levels, adjustable recording levels, a headphone jack, and shoe that fits the optional XLR-K1M adaptor. This all goes without mentioning the shift in focusing technology, there's autofocus (AF) by contrast, and AF by phase. Though contrast AF is more accurate, it has to bounce the focus around, and phase AF is fast, but less accurate – Sony decided to combine them.

The resulting dual AF is fast and will track a subject with temporary movement. The other focus is on the images of course, the?99 has 24.3 effective megapixels with capability of 60p and 24p HD video recording and uncompressed HDMI output at 4:2:2. The feel of the ?99 matches even the most professional DSLRs with its magnesium alloy panels, yet weighs in at a smaller size than many others (less than 26oz. without a lens or battery).

The dual media card slots on the ?99 are for SD cards. If for some crazy reason you want to shoot stills with this camera, try the six frames per second at full resolution or ISO at 50 or 25600. You'll also want to check out the vertical grip, the optional LED flashand an expanded line of lenses.

Ultimately the cost of this camera is a very attractive point – $2,800 body only. The A-mount lenses that are compatible will be joined by a 50mm prime lens next spring, but the Sony ?99 is available this October.