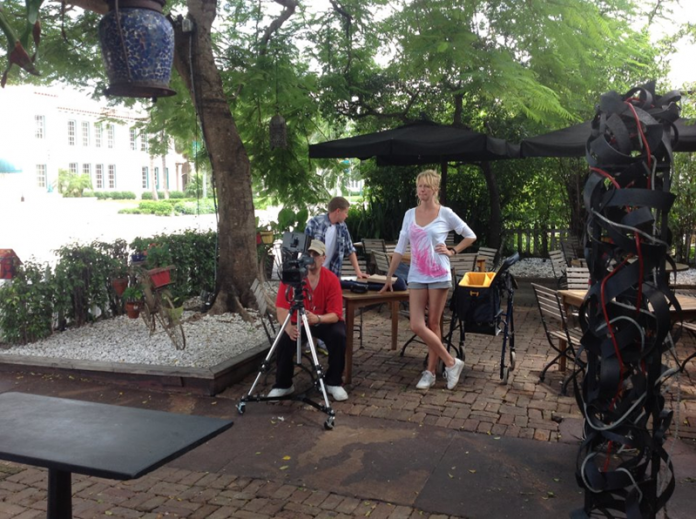 Photo by Kenny Faithful. [L-R] Bruce Paul (operating camera), Luke Cartwright-PA, Kira Stockwell-Director Feature film and video production, what are the difference between these? Videomaker Forum Moderator Bruce Paul (birdcat) is discovering them – right now. A few weeks ago birdcat began a thread to share with us his experiences as takes the job of producer, director of photography, writer and editor through pre-production, production and post-production of his feature film.

The biggest thing to understand as you read through the thread of posts is that birdcat is a very experienced videographer (as opposed to a maker of feature film) and is very familiar with doing video from start to finish on his own. As with any good thread, it's the posts of others that bring liveliness to the discussion, from pre-production, to giving attention to clients, to bringing pizza, the differences are coming out.

The most obvious difference is that there's more people on a feature film crew than on a one-man band. This one fact changes the way you adapt during the shoot, so to reduce the amount of adaptation necessary during production, you'll need to boost your pre-production. Having any sort of crew and casting actors is likely an after thought when shooting as a one-man band.

There are significant amounts of stress tied to hiring a good crew and cast, assuming they show up to be hired. birdcat brings up an emphasis on pleasing investors, as without the financial backing, no feature film can come to completion. If it were your own video, chances are, the video will get done as long as you put in the effort. Then there's the magnitude of the whole, if you are doing a run-and-gun news story rather than a feature film, there is a much different expectation for your final product that suddenly goes from having a day or so of work to months of time devoted to a feature film.

So to a casual observer there may be little distinction between feature film and video, but physical mediums aside the sheer amount of people involved and expectation for the end appears to be the biggest difference. We currently await more posts on the making of The Reward, a dialog-free short that is inspired by an episode of Digital Juice TV. The Reward is currently in production. [image:blog_post:15013]