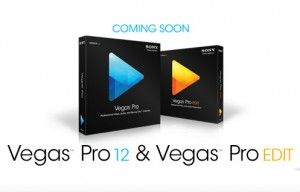 News – Sony Vegas Pro 12 Sneak Peak at IBC – For those attending IBC, the International Broadcasting Convention, in Amsterdam this week, you get a chance to see Sony Creative's latest Vegas 12 in action – for others, you get to read about it here, and you can sign up on Sony's site for advance news when it's available. We know many Videomaker readers use Sony Vegas and For those fans and others thinking of switching, Vegas Pro 12 will now come in two versions. The traditional Vegas Pro collection will include Vegas Pro 12, DVD Architect Pro 5.2, and Dolby Digital Professional Encoder, for a all-around editing to disc solution. However many people are beginning to bypass the disc authoring step and if you want the editing and audio applications only, and don't want to bother authoring, Vegas Pro 12 Edit features the same video and audio toolset as the Vegas Pro 12 collection, but without the disc authoring components.Sony didn't tell us a price yet, but our Sony Vegas Pro 11 review was listed at $680 (packaged), $600 (download), $190 (upgrade from other Vegas professional version). Vegas Pro 12 will be out in the coming months and you can read more about it on the Sony Creative site and from this short press announcement below.

Import and export a wide range of project files to and from Vegas Pro 12. The built-in software can convert between the native .veg file and AAF for Avid ProTools 10, XML for Apple Final Cut Pro 7, Final Cut Pro X (export only), DaVinci Resolve 8, and .prproj for Adobe Premiere Pro CS6 and After Effects CS6.

Create high-performance, edit-friendly Smart Proxy clips in the Project Media view, to achieve faster playback on a wider variety of hardware. Media will automatically and dynamically switch from original to proxy based on the Preview playback settings.

Thumbnails are now optimized for 16:9, and media that is a different aspect ratio than the project will appear letter-boxed or side-pillared. A more prominent border around the thumbnails clearly highlights selected clip(s).

The updated Vegas Pro Explorer now features a Thumbnail View, and supports Windows Libraries including My Songs, My Videos, and My Pictures. Auto-text fill and "Breadcrumb Control" similar to Windows Explorer lets you quickly navigate to previous directories on your system. Using CTRL+ the mouse wheel scales the thumbnail images for added image detail during browsing.

Select two or more video files in the Project Media window and click the Media Properties button to edit a range of parameters across all of the clips, including field order, pixel aspect ratio, color space, stereoscopic 3D mode, and more. Also new:

About Sony Creative Software Today, there is a Sony Creative Software application for every level of expertise, including a full line of consumer software based on the company's professional applications. The company's customers span the globe and include professionals in the film, television, video game, and recording industries, as well as educators, students, and independent artists and producers. For more information about professional and consumer products, visit www.sonycreativesoftware.com.