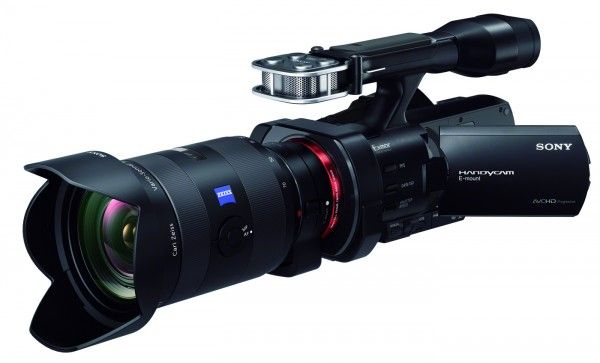 Sony has announced the NEX VG900, which is exciting for a couple reasons.The VG900 is the first camera in their Handycam Camcorder line with a 35mm full-frame sensor. Cinematographer Vincent LaForet recently predicted a possible end to the reign of DSLRs in the video realm due to the release of large frame camcorders. This camera seems to support that notion. Not only does the VG-900 have a full frame sensor, it also uses E-mount and A-mount lenses and has a rocker to support lenses with a power zoom. Additionally, the NEX-VG900 contains a multi-interface shoe, which not only acts as a hot shoe, but also allows the shooter to attach an optional XLRadapterkit which contains a mono shotgun mic and two XLR connections. While not exactly an impluse buy, this camera looks to be a great choice for event videographers and independent filmmakers, due to its expanded versatility over many traditional camcorders and DSLRs at its price point. The NEX-VG900 (body only) will be available in November for $3,300.

[image:blog_post:15011] For those looking to save a few bucks, Sony also announced the NEX VG30, the successor to the much beloved VG20. Unlike the VG20, the VG30 comes with a rocker for an optional power-zoom lens (optional in that it comes as the included lens, but you can purchase the camera without a lens). That alone makes it a worthy upgrade from the VG20. The VG30 will be available in November for $2,700 with the power zoom lens, or $1,800 for the body alone. Read on for the full press release.