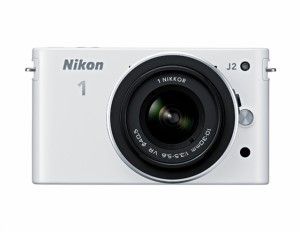 The just released Nikon 1 J2 is a good sign that the mirrorless camera line has reached popularity. This sequel to the 1 J1 isn’t bigger, but returns with the same size sensor and speed of shooting at 10fps. The 10.1MP CX sensor is encased in a metal body and is capable of capturing substantial HD video especially for its size. The option of 1080 HD video is a great standard, but there’s still the option to bring resolution down to 320×120 for 1200fps ultra slow motion video. Even at 640×240, slow motion video reaches 400fps.

While you’re in the vein of creating stunning visuals, you’ll want to take a second look at the 3-inch LCD of the Nikon 1 J2, it is more than twice as clear as the Nikon 1 J1 at 921,000 dots. The HD video that you create is going to benefit from the manual controls that you get from this middle-stage camera that bridges DSLRs and pocket cameras. Go into the Creative Mode and you’ll be able to make camera adjustments to aperture and shutter speed, then to round out the exposure of your stills and HD video, take the camera from 100 to 3200 ISO.

The returning cast of features includes manual focus, an SD card slot, and MOV files for video withNEF (RAW) and JPEG for stills. Additionally, the EXPEED 3 image processor and 73-point auto focus will make for fast shooting of HD video and stills. There is even the new option of getting a pink or orange in addition to the red, silver, black or white body. Nikon has done well, and with just a handful of adjustments to their camera, it is very nice to find that the Nikon 1 J2 starts at $100 less – $550. It’s no wonder that Nikon also sends out a new lens, the1 NIKKOR 11-27.5mm to interchange with the Nikon 1 J2, we just love spinoffs.