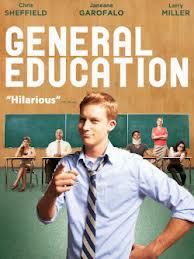 “When you’re just starting out, it’s good to write about what you know,” says producer and screenwriter Jaz Kalkat in a phone interview with Videomaker recently. And at only 27 years old, he already seems to know what he’s talking about. Kalkat co-wrote and co-produced the movie “General Education” that is out in selected theaters this week which nabs a couple “names” as members of the cast: Larry Miller, Janeane Garofalo and Chris Sheffield.

Of special interest to people who live in Videomaker‘s home-town is the fact that “General Education” was shot right here in our area, and Kalkat says shooting in one’s home turf was one of the best decisions he and director Tom Morris made about the production. “We had only 20 days to shoot – very tight. We used our area as our backdrop and shot 6-10 pages a day. The towns jumped in with great support granting us access and permits. They were very cooperative and had a lot of fun, too, much better than if we tried to shoot in a traditional Hollywood setting.”

Kalkat says boosting the local community is a one great way producers can get assistance and support by offering to shoot a movie on a local level. The cost of housing, feeding and wrangling cast and crew is another. “We shot our film last summer and the crew stayed at Craig Hall”, he says of a housing facility for local California State University – Chico students, which is vacant in the summer months. On the other hand, the cast stayed at a local hotel which offered prices at great prices compared to big cities.

Produced by Kalkak along with Elliott Feld and Kevin Liang, this Coming of Age story follows the classic genre of a high schooler asking himself “what do I want to do with my life…” as he is urged by his dad [Miller] to take an athletic scholarship and the conflict begins when the main character, Levi Collins [Sheffield], has to reveal to his parents that he has to go to summer school to acquire his diploma.

A graduate of Brooks Institute, Kalkat says it would be something he could write about because he felt close to the subject, first following a focus on history in college before he decided to follow his heart and get into movie producing. “What do I want to do with my life?” he said, “Everyone goes through it after high school. You’re guided through the school system and now you’re free… what do you do..?” Kalkat knew what to do – make a movie about the experience.

He says he enjoyed the whole process at Brooks immensely, learning how movies are made, “how directors work with actors and as a producer learning how to communicate with all departments properly, logistics of location, learning the lingo and making mistakes.” He says even a low budget production like “General Education” can receive a good audience if it has good production value.

The Wellgo USA Entertainment production, “General Education” cost from $300,000 to $600,00 to make (all of the marketing costs haven’t yet been tabulated) and Kalkat says it would have been a lot more difficult if they didn’t have good sales representation. Before a single frame was shot they acquired a public relations firm and sales reps. They then distributed it at film festivals around the country with Jason Kasperski, of Prodigy Public Relations helping to pull a lot of the final pieces together to get the word out.

Kalkat has been dreaming about making movies all his life, starting with 30-second stop-motion episodes he called “Army Men Go Home” when he was 12, using those little green plastic men. “It had adventures like on the Star Trek series, and I made 26 episodes shooting frame-by-frame using a VCR and editing it on Pinnacle.”

A final word from Kalkat is “no one can do it all alone all the time.” Surrounding yourself with trusted cast and crew and getting the right connections can push your movie ahead of many others. When it comes to making a movie, Kalkat urged video producers to think about how they’re planning on presenting and distributing it, not just shooting and producing. “No one can do this type of production alone,” he says, “We gathered our staff from people we’ve worked with at USC, AFI and Brooks along with a good number of L.A. pros ” (University of Southern California, American Film Institute and Brooks College are all Southern California film schools that many major Hollywood players graduated from, teach at or support in some way. – good connections!) “We then hired a casting director who sent scripts out to agencies who followed up with agents…” and this is what a good General Education in movie making can do for anyone.

The hilarious Larry Miller has been in Burn Notice, Best in Show, The Princess Diaries and Pretty Woman among many other films, Janeane Garofalo counts The Truth about Cats & Dogs and TV’s “24” among her many credits and up and coming star, Chris Sheffield has been seen in The Rookie and Transformers: Dark of the Moon.

“General Education” opens locally at the Pageant Theater in Chico and Feather Falls theater in Paradise as well as in New York, Los Angeles and a few others across the country this week.

We’re eager to see where the Jaz Kalkat and Tom Morris’ future careers in moviedom take them.