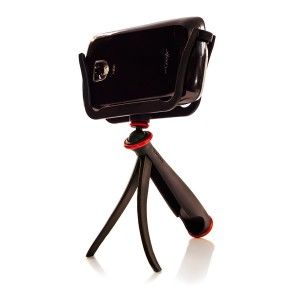 I don't care how much of a video nut you are, everyone can agree that the best camera is the one you have. So if all you have is your smartphone, you'd be smart to keep the Woxom Slingshot within arms reach. If you've ever shotmobile video, you know that holding a cell phone without introducing unwanted wobble and pivot is extremely difficult. With that,the purpose of this product is clear: to make it easier to hold your phone still with one hand.

Fire Away! One look at the Slingshot and you'll instantly know how they got their name: it looks just like a sling shot. Fortunately it doesn't act like one (although I guess you could say it's also similar in that you "shoot" things with it). The fork shaped mount grips just about any Apple or Android smart phone snugly (sorry, couldn't find a Windows phone, although I have no reason to believe one wouldn't work). Going around the office, I have yet to find a phone that doesn't fit. Shooting mobile video with anything much smaller than an iPhone would likely be too small, unless you can pad it out with a case.

The Woxom Slingshot features a ball head with a 1/4"-20 threaded mount, which means you can remove the fork of the slingshot and mount it to other supports, like a Gorillapod or standard tripod plate. One frustration I had with the ball head is the difficulty in twisting the mount. Imagine twisting a camera mounted to a plate; twisting clockwise tightens it (or in this case, turns the ball mount), and twisting counter-clockwise loosens it. That means if you twist too far clockwise trying to keep the phone even, you have can't twist back in the opposite direction to correct, as you'll start to un-screw the fork. The solution, of course, is to continue twisting clockwise near 360 degrees until you have the phone where you want it.

Finally, with mobile video, hands-free shooting is nearly impossible, as phones have a tough time balancing on their edges. Maybe that's why neither Apple nor Google included a timer in their default camera apps. The designers of theWoxom Slingshot know this of course, and have included fold out legs within the handle, so the Slingshot can act as a mini-tripod. For me, this feature is as or more essential than just about any other feature offered. If you spend a lot of time outdoors, you'll love being able to set your smartphone on a rock or fallen tree for timed photography or video. Just be sure to download a new camera app with a timer.

The Bottom Line In the time I've spent with the Slingshot, I've come to rely on it. It's small, light, and extremely versatile. Going back to shooting mobile video without this kind of support just seems primitive. The Woxom Slingshotis planned to ship in early September and is listed at $20.