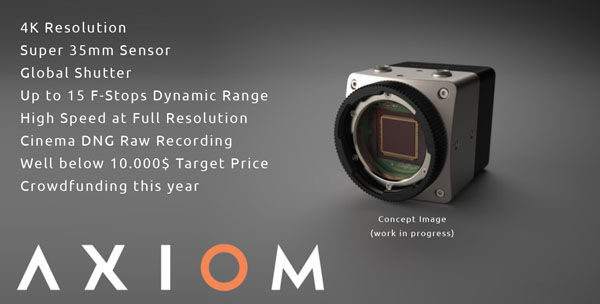 There’s an open source camera hitting the market soon called theApertus Axiom, and it may make you re-think the concept of what a camcorder is.

I’ve never honestly thought about it before. When you break it down to its individual components, what exactly is a camcorder? Obviously it’s a lens, mounted in front of an image censor, that feeds data to a small computer which processes that data to form an image file. Then on top of that there are components like an LCD screen, software that allows you to manipulate how the censor works and how the CPU processes the image data. Next there are elements like some sort of recording device, like a hard drive or a flash media reader/writer, and finally there’s amicrophone(or microphone input jack) which captures audio and sends it to the CPU to attach to the video file.

So now what if you wanted to build your own camera? You can go online and buy lenses, LCD monitors, hard drives, card readers/writers, microphones, and digital audio recorders. The hard part is coming up with the image censor, CPU, and software. For this level of modularity we’d want to shoot with a Red camera, right? A Red camera woulddefinitelybe modular, allowing us to add whatever component we want or need, but we want to go a step further and go truely open source.

Now that’s where the open sourceApertusAxiom comes in. It is essentially an Elphel camera running Linux and open source image processing software. From there you can simply attach a laptop or tablet (to act as a viewfinder and camera control), hard drive or SSD, and a digital audio recorder.

But why would someone go with an open source camera like theApertus, when a Red camera, or even a more traditional camcorder or DSLR would do the trick, possibly for significantly less money? Really, it comes down to returning the art of filmmaking, in at least one way, back to it’s film-based roots. As theApertusteam points out, filmmakers used to be able to tweak and adjust their film cameras to meet their needs. Today they are much more beholden to individual camera manufacturers.

What do you think? Are you a shooter with the money to spend on building your own cinema camera rig?