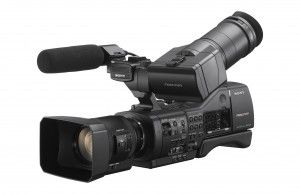 Determined to balance the incredible features of a DSLR with the ergonomics of the traditional camcorder that we all crave, Sony has just announced its next professional camcorder in the NXCAM line – the Sony NEX-EA50UH… and this cam delivers. The NEX-EA50UH, what Sony is calling a "cinematic event videography camcorder," is Sony's first 35mm large sensor camcorder using a servo-controlled zoom lens as well as APS-C image sensor, giving video shooters multiple options and flexibility at an affordable price. This "entry level" APS-C 35 will only set you back about $4500 for MSRP – street price will vary, and will be on the market very very soon.One issue some videographers with DSLRs have had is the inability to control a zoom speed using a manual-zoom-only lens. This isn't a concern with still shooters, but when you depend on a long slow zoom for a video shoot, that can be a pain without yet another accessory. Sony says video shooters will be able to carry out a constant smooth zoom speed with this camera as well and can apply a 2x digital zoom function using fixed focal length lenses.

Among it's many features, the new NEX-EA50UH comes with a ECM-XM1 shotgun mic, and has many professional functions such as 2-channel XLR audio abilities, linear PCM audio and timecode. The camera works with Sony's Mirroring Memory Stick in 16, 32 and 64GB volumes, and has a dockable flash memory unit for simultaneous back-up recording. The camera also has a nice expandable shoulder pad giving you that solid support and balance of a much larger camcorder, yet the pad folds back giving you a nice compact hand-holding experience, marrying pro shooting, DSLR functions with a traditional camcorder feel. The NEX-EA50UH is scheduled to be on sale in October.

Read more about it in the Press Release from Sony below:

Users can also capture 16.1 megapixel still pictures, and the new camcorder has a built-in mechanical shutter for high-speed performance while capturing still pictures. The NEX-EA50UH incorporates Sonys E-mount interchangeable lens system, which enables auto focus, auto exposure and stabilization during video shooting. With its short flange back distance, users can attach not only established A-mount lenses via the LA-EA2 lens mount adapter, but also an unrivalled choice of other brand lenses using third-party adapters. The NEX-EA50UH camcorder comes with a newly developed Power Zoom E-mount lens E PZ 18-200mm F3.5-6.3 OSS SELP18200. It features auto focus, continuous variable iris and Optical Steady Shot image stabilization with Active Mode, making it ideal for shooting moving images. It is electronically controlled by both the zoom rocker lever on the camcorder grip and the camera handle, as well as by the rocker on the lens itself and also via LANC remote controllers. Film-makers can achieve a constant zoom speed and smooth slow zoom, both of which can be difficult to accomplish with manual zoom lenses. In addition, the use of fixed focal length lenses can simulate a zoom effect by using the smart 2x digital zoom function, ensuring users never miss a shot in fast-paced environments.

A new design lets users shoot in a way that best suits their style, allowing them to quickly switch between handheld and shoulder configuration without the need for additional accessories. The unique design of the NEX-EA50UH further increases its versatility. When the shoulder pad is extended, users can balance the camcorder on their shoulder for added stability during longer shooting times. Alternatively, when the shoulder pad is returned to the original position, the camcorder becomes compact enough to use in various handheld styles.

The NEX-EA50UH includes a range of professional functions such as 2-channel XLR audio (the ECM-XM1 Shotgun microphone is included with the NEX-EA50UH), Linear PCM audio, time code, user bit and built-in GPS. In Addition, Sonys HXR-FMU128 flash memory unit can dock directly to the camcorder for simultaneous back-up recording. Sonys new Mirroring Memory Stick (16, 32, and 64 GB capacities), which has professional dual-recording back-up features, can also be used. The new cards are designed to deliver high reliability and data security through a dual recording (mirroring) function, and are recommended for use with Sony NXCAM camcorders, including the new NEX-EA50UH model. The NEX-EA50UH is planned to be available in October 2012 at a suggested list price less than $4,500.