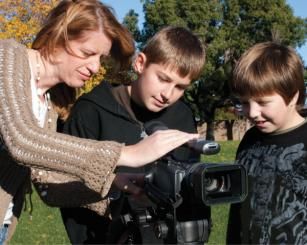 Trying to shoot video without any gear can be a nightmare. The last time I tried it is when I was 13 — and there's reason that I haven't tried it since! My parents had bought their first camcorder and, after they got bored with shooting a few birthdays and holiday gatherings, they let us kids play around with it. My little brother was eager to shoot footage of himself dropping firecrackers off our balcony, but I had bigger things in mind. I wanted to make a REAL movie. I'd just seen Star Wars for the first time and I was convinced that I could replicate the same effects using hand puppets in my backyard. (Okay, we were a little overly ambitious. We should have started with something a little more kid friendly.) Our movie involved alien invaders attacking Earth. Which I would then defend while wearing my karate gi, because I had the vague idea that Luke Skywalker's white pajamas were the source of his powers. There were only two problems: 1) I only had two actors — my 10 year old brother Tommy and my 7 year old sister Katie — and neither of them wanted to take directions. 2) I only had one piece of gear — that single camcorder — which kind of limited how effectively I could emulate the fancy film tricks I saw in my favorite movies. Luckily, as kids we're nothing if not resourceful. No budget to bring an alien robot to life? We just taped a yard of dental floss to a Happy Meal New Food Changeable and dragged it along the ground. It looked like he was really moving, if you just ignored that incredibly obvious piece of string…. But the really annoying part was filming the climactic scene where our pajama-clad hero (me) teamed up with Indiana Jones (Tommy insisted that his favorite film hero appear in the movie; he stipulated it in his contract) to fight a giant space iguana (Katie's hand in a puppet). Whenever we asked my sister to work the camera and the puppet at the same time (she was multi-talented), she would inevitably forget that she needed to shake the puppet but NOT the camera. So eventually Tommy tried to solve the problem by putting the camera on the back of a toy truck and having her push it along with her foot. The footage was steady. It also meant that the scene had to be changed so that the climactic fight took place on the floor. [image:blog_post:14757]I didn't know it at the time, but Tommy had just discovered the dolly. Granted, it wasn't the ideal solution, but that jerry-rigged dolly got the job done and we'd become part of a grand tradition of videographers making due by building their own equipment. You've probably had to do the same at some point. Whether factory-made gear is outside your price range or you don't realize what you need it until it's too late to go to the store, homemade video gear is the alternative preferred by videographers everywhere. Over the years, readers have written to us to share some of their favorite "kludges" that have helped them out in a pinch. We've collected some of the methods that worked best for us in How to: Do It Yourself Video Equipment. What's worked for you?