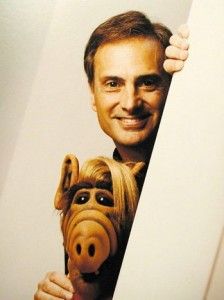 Remember Alf? He's back! Not in pog form, though, the furry alien from Melmac that dominated sit com universe of the late 80s is supposedly coming to the silver screen. Over 20 years since Alf first aired, it's hard to explain just how huge he was at his prime. The television series was one of many odd high concept shows that proliferated in that time period, like Small Wonder and Silver Spoons, but Alf was king of them all. The story of a lost alien living with a typical suburban family seemed to strike a chord with the TV viewers of America. Perhaps it was something in Alf's back story — he was a refugee to Earth, his planet destroyed in a cataclysmic nuclear accident — that spoke to a nation just entering the final days of the cold war and coming to terms with so many decades of a nuclear arms race with the Soviet Union. In one of his earliest episodes, Alf even contacted the president to warn him about the folly of nuclear war. Who would have thought that the only thing standing between us and complete nuclear destruction would be the heart-felt pleas of a single fuzzy puppet? (I have a friend who likes to credit Big Country's Peace in Our Time with ending the cold war, but I ascribe to the puppet view of history myself.) Okay, so in reality, Alf didn't actually save us from nuclear armageddon (That we know of, at least). He was just a goofy sit com character who told obnoxious jokes and ate cats. Pretty risque for the time! can you imagine someone who eats people's pets becoming a big star today? In any event, it's still odd to think that studios believe there's enough interest in Alf to warrant a feature movie. Sure, those of us who grew up with Alf will probably go to see his big screen debut out of nostalgia, but will he appeal to today's kids? Word is that the new Alf won't be a mangy puppet like his predecessor, but a slick CGI construct. That might encourage younger audiences to suspend their disbelief a little easier. Hollywood is fond of reimagining old sitcoms, cartoons, and video games as movies. Some seem like they should be a natural fit — Land of the Lost might have been an obscure series, but the idea of a lost world populated by dinosaurs is ripe for the big budget treatment. Others just leave you scratching your head, like Car 54, Where Are You? Why did anyone think that this TV show deserved a movie? Is there a vocal population of Car 54 fans out there that we're somehow missing? Regardless of our thoughts on the matter, Hollywood will continue to take this track for the foreseeable future. Remakes are more bankable than original stories — a pre-existing property will already have a legion of fans who can be counted on to shell out money for tickets. We've already seen movies based on Scooby Doo, The Smurfs, He-Man, Leave it to Beaver and so many other shows…what could be next? Here are my picks for what I'd like to see made into films:

[image:blog_post:14765]1) The Far Side — Another great relic of the late 80s, The Far Side helped revolutionize the comics page by popularizing the one-panel strip and by constantly pushing the envelope on acceptable humor. Surprisingly, there actually HAS been a Far Side movie. It was called "Tales from the Far Side" and aired as a Halloween special in 1994. But we're still hoping for a live action movie, because it would be interesting to see who they'd cast to play Larson's distinctive beehived, horn-rimmed glasses wearing characters. And what about all those cows and dinosaurs? A creative and resourceful director could have a lot of fun with this source material.

[image:blog_post:14766]2) Lidsville — We've already seen a Land of the Lost movie, so why not bring Sid and Marty Kroft's most psychedelic series of all to life again? This show about a world of giant talking hats — yes, hats — probably frightened more children than any other show on TV. In fact, considering how many people would watch this just out of disbelief, it's atrnge to think no one i nHollywood's jumped on it yet! The only question is who could possibly replace the immortal Charles Nelson Reilly?

[image:blog_post:14767]3) Dinosaucers — The late 80s was the heyday of high concept TV cartoons like Bravestarr (Cowboys in space!) and Pirates of Dark Water (Pirates in space!), but this surprisingly silly series about dinosaurs from space takes the cake. Even knowing the premise, viewers were unprepared for just how outlandish Dinosaucers could get. Both heroes and villains were completely unprepared for life on Earth and most of the series revolved around having them misinterpret television commercials. (In one episode, the villains became convinced that GI Joe action figures were real weapons after watching a TV ad.)

[image:blog_post:14768]4) Laff-A-Lympics — Hanna Barbera properties like Yogi Bear and The Flintstones have already become inexplicable live action movies, so why not go all the way? Laff-A-Lympics brought the entire Hanna Barbera roster together to compete in a series of faux Olympic games for… well, the reasons were never exactly clear. Did the teams represent different countries? Just what was going on here? It never really mattered, since the series was probably more intended to make sure that second string characters like Wally Gator and Yakky Doodle remained high in the public consciousness. The big question is who could they get to fill in for Dick Dastardly?

[image:blog_post:14769]5) Mr. Belvedere — This comedy about a proper English butler who starts working for a regular American family (possibly because he lost a bet of some kind) was a surprising hit in its day. Now that its competitor Alf is destined for the big screen, could Mr. Belvedere be far behind? There are endless possibilities for weird things to turn into movies. What would you like to see become a movie? On the other hand, what would be the worst idea to become a movie?