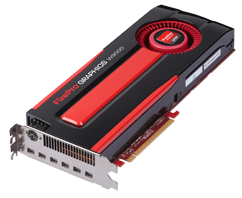 Graphics cards and video do indeed go together, and AMD’s FirePro Workstation series can lead you to a professional level of video production. Take the AMD FirePro W7000 for pro/mid-rangers and find the heart of AMD’s defining qualities, PCIe 3.0, AMD PowerTune, AMD ZeroCore, GeometryBoost and GCNarchitecture. Then the comparison begins between the W7000 and its competitors and the numbers sure stack up in AMD’s favor. The simplest to gather however may be the number of displays, and the W7000 can drive six of them (though four outputs are provided). When compared with its predecessor the V7900, the W7000 basically doubles the 3DMark 11 score and performed at least 20 percent better in other tests.

Faster is better as a general rule here, and the reality is that the price follows accordingly, though not necessarily to scale. The top of the line W9000 ($4,000) has a memory bandwidth of 264GB/s while the W7000 ($900) has 153GB/s. It is this value that AMD strives for and and we really appreciate the savings when we can reuse technology we’ve already got, and supporting multiple monitors is perfect.

These FirePro Workstation graphics cards support three, four or six monitors with the W5000 at three, the W9000 at six and the two middle cards at four. It is notable that with DisplayPort 1.2 any of them can drive six displays. What options that opens up for you is your business, but six displays leads us to think of video walls. Wait, if that’s not enough, you can also connect additional cards via framelock/genlock.

So maybe it’s time to revisit your budget for computing costs and consider an upgrade. There is a science behind the increasing nature of technology, so perhaps this is the next peak at a very good value. If your budget is somewhere between the W5000 and W9000, look for the W8000 to cost $1,600 and the W7000 to be $900.