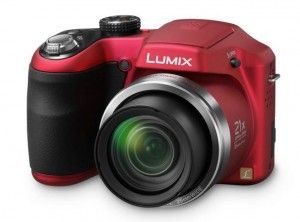 Panasonic has announced six additions to it's Lumix line of cameras today, including the LZ20, FZ200, SZ5, FZ60, LX7, and G5. Let's take a look at the details we video nuts really care about. The LZ20's shoots in 720p using Motion JPEG compression. Not surprisingly, the maximum file size is capped at 4GB, but the maximum record time is an impressive 30 minutes. For a camera that's primary function is taking still photos, this is pretty good.

The LZ20 captures to an SD card, but it also has the ability to transfer files wirelessly to smartphones and tablets using the Lumix Link application for iOS and Android. Additionally, the camera can be controlled with Lumix Link, allowing shooters to adjust zoom, focus, and shoot remotely. Currently, it's unclear whether or not these settings are able to be adjusted while recording video.

[image:blog_post:12711] The FZ200 shoots 1920 x 1080 video at an impressive 60p in AVCHD MPEG-4. It also includes a 24x optical zoom and manual control of the shutter speed and aperture (no word on ISO), which is great, because the lens goes down to 2.8. Also included is a zoom microphone, which should cut down on ambient and wind noise. The big takeaway here is the FZ200 is offering very good zoom capabilities without having to cut down the size of theaperture. Full press release

[image:blog_post:12712] Like the LZ20, The SZ5 shoots 1280 x 720 video at 30p with the same record time restrictions. Additionally, it uses Lumix Link to transfer images to your iOS or Android device wirelessly. I don't see anyone buying this camera for its video capabilities alone, but if you're looking for a point and shoot with wireless capabilities that also happens to shoot video, this might be worth considering.

[image:blog_post:12714] The LX7 shoots at 1920 x 1080 at 60p (AVCHD) or 30p (MP4). Unlike a couple of the cameras mentioned above, the zoom is limited to 3.8x, but the aperture goes all the way down to F1.4! Pretty impressive specs for a camera with such a small form factor. Not surprisingly, it also includes a zoom microphone. Full press release

[image:blog_post:12715] The G5 shoots at 1920 x 1080 at 60p (AVCHD) or 30p (MP4) and includes a zoom microphone. The impressive part of this camera is that it has full auto-focus when recording video and will even track a subject defined by the user as it moves throughout the frame. The G5 also includes a high resolution (920,000-dot)touch screen articuluating LCD screen. It rotates 180 degrees to the side and 270 degrees up and down. This is feature I believe is under represented in most still cameras that shoot video. Full press release