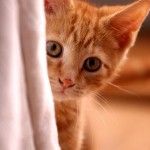 I must say, I've seen it all now. We just discovered this online video festival that is all about online Cute Cat Videos. You read that right – a festival celebrating internet cat videos. This Online Cute Cat Video Festival covers all the best videos already making the rounds on the internet and anyone can vote for their favorite between now and July 30th. And yes, it's the Real Deal. As the introduction to the festival's web page states: this experiment tests the social boundaries of the online community with a live, off-line event as we attempt to gather in physical space and real time to enjoy one of the internets most popular phenomena. The festival "showing" will be held on August 30, in Minneapolis, with the winning videos playing out on the Big Screen. It's free, open to the public, and cat-friendly. Meanwhile, what IS it about cat videos and people's near-obession with watching, and – more importantly – sharing them? Read on to learn how to (possibly) succeed in making your own viral cute cat video of your own. Step one: get a cat. Step two: learn patience.

How to Make a Viral Video? Make a Cute Cat Video Having a successful YouTube viral video is the dream of nearly every person who hits the upload button, but the fact of the matter is you might have a better chance of getting hit by the proverbial lightening bolt than having a successful viral video. (Remind me to tell you my lightening bolt story later.) According to Most Watched Today, viral cat videos are one of the biggest group of videos people watch and share, as this "Catvertising" commercial spoof tries to illustrate – as well as Kittywood, a spoof on a Hollywood-type production company that only makes cat videos. Viral videos today are what catchy jingles and slogans were pre-internet. Remember "Where's the Beef"? How about "Got Milk?" or "Don't Leave Home Without It". These particular slogans were so popular that they took on a life of their own and are still parodied today.Coming up with a slogan that goes viral is like finding the Holy Grail to most advertising executives and viral videos are todays answer to advertisings viral slogans.

Making Money with Viral Videos In 2007, YouTube set up a profit sharing program giving users a partner status if they had a good number of videos and viewers. This partnership gave them a little bit of income from their YouTube videos. Two years later, in 2009 YouTube offered the profit sharing abilities to everyone using Googles AdSense. Videomaker has written stories on video producers like Kip Kay making more than $100,000 in income from How To videos he produced for Metacafe. But you can work day and night, invest in boatloads of money, and still only a mere 300 people have viewed your video. So what do you do? Add a cat. No, really. Throw in a cat somewhere and you just might double your view. What IS it about cat videos that make people want to watch and share?

Why Cats? Recently, journalist Sarah Stodola decided to find out why cute cat videos like Maru and Nora the Piano Playing Cat are so popular and why one would aspire to produce a viral cat video. Some of these cats even have their own website, which I have yet to set up myself. Why do it? well, if your cat video goes viral, you can make a lot of money. Or not. Stodola reports that YouTube is hedgy at giving out real figures but estimates suggest that monetized videos bring in anywhere from $1 to $10 per 1,000 views. If your video attracts a million hits, then, you might make anywhere from $1,000 to $10,000. For a viral hit, revenue could easily reach into the six figures. Thats pretty good all video producers would love to see that, so I was curious to read Stodolas report and find out how she fared. She said that since she didnt own a cat she borrowed cats from friends, (or rather, used bottles of wine to bribe the owners to let her video the cats) and she sat around after a nice dinner with her video camera at hand. And she said that she failed miserably.

Why it didnt Work Catsparella, a site dedicated to cat videos for cat lovers, says "If you point a camera [at] a cat and expect something noteworthy to happen, you're probably wasting your time…. For every Maru video that makes it way on a major site like Cute Overload or I Can Has Cheezburger, there are probably ten or more videos of the famous [cat] that don't." As an insider, a good video producer can also tell why her experiment didnt work – the production value wasn't there. One of the first things Videomaker readers learn about working with children or animals is that you have to shoot on THEIR time following their rules. Dont try to catch a baby being alert and happy before its had its nap, for instance, or when a dog is all hyped up with too many people hanging on the set. For a great cat video, youd have to know the animal well, know its habits, and almost leave that camera running all the time. You have to practice patience, Grasshopper, and then practice more. Stodola also broke the cardinal rule of audio on the internet: dont let ambient copyright music play in the background or – as did happen to her – youre going to get cut off from YouTube. She learned her lesson after her first YouTube takedown report and tried a new approach, but she still missed one more important factor: capture your audience in the first two seconds or forget about it. The attention span of an internet audience is so short that even a longer-than-average loading time will have viewers moving on to another site. After all, there are more than a billion videos on YouTube to watch, and millions of them are cute cat videos. The last grabbing-the-audience error that Stobola made was editing. Although admittedly she isnt a video producer, she did use YouTubes video editor to clean up her videos which is quite commendable since the majority of videos on YouTube stink with poor production values – we give her props for that. But she held the opening scene wa-a-a-a-y too long before we saw the cat do anything cute. Always keep your audience interested by cutting to the chase.

How to Make your Own Viral Video According to the YouTube FAQs, 48 hours of video are uploaded every minute, which works out to be about 8 years of content uploaded daily. In a weeks time, there would be more YouTube videos than the entire 60 years of TV broadcasting. Thats a lot of competition. Hongkiat.com, a site for bloggers and designers, posted 5 guidelines to create great slogans and the advice holds true for making viral videos: Identification. Memorable. Beneficial. Differentiation. Keep it simple. You don't need a lot of production value, as long as you grab the audience in the first 2 seconds, can hold their interest, identify quickly what the video should represent, make it easy with no cheesy effects and make it memorable and entertaining, (which usually transcribes to funny or having an emotional impact.) Oh. And throw in a cat. Stodola interviewed Jack Shepherd at BuzzFeed, a site dedicated to videos that get people talking – no 'millions of crap' videos, just those that people share in great numbers. Stodola writes in her blog, "He told me that cats generates 3.5 times more viral traffic (shared via Facebook, Twitter, email, etc.) than the average BuzzFeed post," she writes, "and they generate a whopping 14 times as many reactions (likes/dislikes). Many of these videos can become commercial successes when a cat food company wants to use your silly cat video in their advertising campaign, but again, thats not why people want to upload cat videos. They do it because cats are cute. Period. And people will watch. Period. Going viral is just the cherry on top.

[Editor's note: this story was updated July 20 to add the information about the Cute Cat Video Festival]