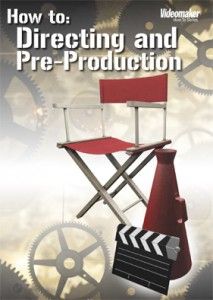 CHICO, CA Videomakermagazine has released a new training DVD to help aspiring movie directors master their craft and make better films and videos. How to: Directing and Pre-Production is a complete resource for any director who wants to understand how their early decisions, even before the camera starts rolling, are vital to the success of his movie.

The director has the hardest job on set — he has to coax stellar performances from an entire cast of actors, while keeping his behind-the-scenes crew under control and on the ball. He has to make all the decisions about every aspect of the movie — from scripting to lighting to sound — and he has to make sure he does it all under budget. How can a director keep track of it all? This complete training DVD will show all the tricks that a director needs to make sure his production never leaves his control. It’s an essential must-have for the beginning or prosumer director.

Learn more about How to: Directing and Pre-Production.

For effective communication, begin production with a clear idea of your viewers’ role. Consider how camera angles may change the relationship your viewer has to your subject.