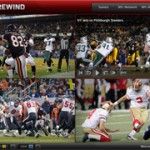 [image:blog_post:12743] NFL Game Rewind 2012, studio directing, and you. Now these three many not have any correlation whatsoever, but the fact is, many of us will never be in position to direct 22 cameras for a live broadcast. Now let me connect them, with NFL Game Rewind you'll have access to 22 cameras, on the field, in the air and the end zone, then you have the power to view four at one time, and you can have this your tablet to boot.

Ultimately, NFL Game Rewind is your private studio with professional camera crews, top-tier equipment, extremely high paid talent, and the ability to skip ads.Yes you won't be switching cameras with the pace of the real directors, but after the telecast you'll be able to "edit" together your viewing experience. The amount of control you can exercise with viewing the NFL is staggering, and since you might get caught up in the action developing on screen, there are markers for big plays, much like you might make markers on your own video to help you edit. If you wanted an automatic editor there's an option for a condensed game. What appears to happen here is a simple crossfade from one play to the next, eliminating the 10 or so seconds of players shufflingand huddling. This feature is very much like the automatic editors that have been promoted for home video use. If you're starting to see the trend here that's good, otherwise you might need to see some game film. [image:blog_post:12744]

[image:blog_post:12745] If video editors could get the combined technologies that are being developed for football consumption, there are huge strides to be made. For instance, take your TV's programming, multicamera capability, play, pause and access to already completed video (I'm thinking graphics and titles) and record all of this, it could bring the pedestrian video editor to a new level. We could edit our own trailers for TV shows and movies, create parodies like none other. If we added in a feature to record a voice over, there's a simple way to create a commentary or practice play-by-play and color commentary. This all stems from the fact that people love video of football, no matter how painful it is to watch.

NFL Game Rewind Season Plus is $70 for the full list of features, with smaller packages for $35 and $40, and the video archives alone might be worth it since you get the previous three season's games. Keep in mind that a yearbook video from NFL films usually runs about $15-20, so watching a few of these makes the value jump. The only thing it's missing – capability to draw those yellow lines around players and crazy fans.