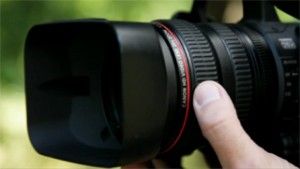 When I'm on a shoot, I constantly think about what tool can take a camera shot from ordinary to extraordinary. There are some really great camera accessories out there that can help you achieve that exact goal. Who doesn't want to glide along the dolly track for that smooth shot, or throw on that stabilizer and get a great follow shot? Many times, just keeping your shot steady on a tripod can separate a beginner from a pro. However, relying too heavily on the tools in your arsenal can actually restrict your options.

During The Basics of Video Production Workshop at Videomaker this weekend, I found the participants to be unhindered in their ideas for camera angles and shots. We were shooting some scenes on a basketball court, and the creativity the participants used was impressive. From unique angles, to shots that required grips to lift the talent up to hang on the rim then run out of frame for the shot, nobody took the easy route.

[image:blog_post:12785] When the script called for a shot looking down into the hoop, my first thought was, well, we don't have the jib, so we're out of luck. To my surprise, the student who was directing the shot spotted a picnic table about 50 yards away. A little heavy lifting and a short step ladder allowed him to literally scale the hoop and get a greathand-held shot looking directly down on the rim and tilting up to reveal the entire court for our final scene. I was so impressed I had to grab the camera a take a quick shot of it.

So whether you've been shooting video for 10 minutes or 10 years, don't be afraid to be bold when your think about possibilities for your shots. The only real risk you're taking is that the great shot you get might end up on the cutting room floor, and we've all left a few gems there in our time.