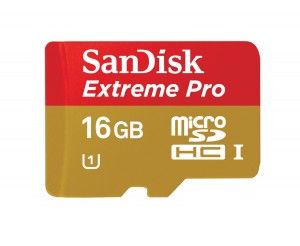 A memory card fast enough for video is the substance of mobile video production. The SanDisk Extreme Pro microSDHC UHS-I card approaches top-of-the-line speeds for memory cards. The price is quite a kicker though. It wasnt too long ago that a 95 megabytes per second (MB/s) 16 gigabyte (GB) card was tailored for the pros only – at $100 retail we still see some of that exclusiveness, especially when pedestrian cards cost literal fractions (one-half or one-quarter) of the retail here.

The big kick in the pants to all of this – the class numbers SanDisk has given its cards is self-explanatory. Class 2 has write speeds at two MB/s. After a little math, our equation means that the Extreme Pro microSDHC UHS-I card with 90MB/s write speeds is loads faster.There is some salt to take with those numbers though. The UHS speeds allowed by the new microSDHC card have a minimum of 10MB/s so to be fair and honest to video, the demands on data are as great as they come, and that means when pressured with the most taxing processes, the Extreme Pro microSDHC UHS-I card is five times faster than SanDisks Class 2 cards.

If youre wondering about the extremities this card can withstand you are looking at operating temperatures from (-13)-degrees to 185-degrees Fahrenheit. This thumbnail-sized card can also withstand dust, water and X-rays. These cards are mainly going to see use in mobile devices, phones or tablets, and we know that video is becoming more capable with these devices. So, while the advertising will remind you that the card has blazing fast speed, true if youre just grabbing still shots, but if you need video, the speeds are less mind-blowing and more professional.

The SanDisk Extreme Pro microSDHC UHS-I card comes at either eight or 16GB and is priced at $60 and $100 respectively.