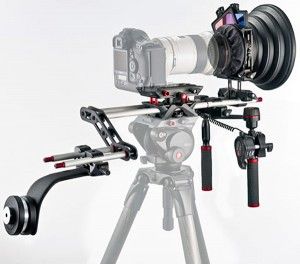 The advancement in technology over the last decade has led to the creation of smaller, more versatile cameras. Their portability and ease of use has made them popular worldwide. However, taking a good quality photo/video using these devices requires use of accessories that may prove to be too cumbersome. The Manfrotto Sympla facilitates in taking a perfect shot by allowing a range of components to be connected to the camera, giving better control and ease of handling.

Sympla Systems: There are three systems available, Sympla Flexible Mattebox System, Sympla Shoulder Support System and Sympla Long Lens Support System. The Sympla systems are versatile, they can be configured in a variety of ways to best suit the videographers need for the specific shot. Each system is designed such that it can be assembled quickly and hassle-free. The controls and mechanics of the rig allow minor adjustments to be made without the use of any tools. The Flexible Mattebox System ensures that required amount of light enters the camera lens. The Mattebox slides on rails and can be adjusted both horizontally and vertically relative to the lens. It is designed to fit common sizes of lens and allows for quick lens change. The Shoulder Support System allows the rig to be mounted on the shoulders, giving the videographer user friendly controls with mobility. Long Lens Support provides a platform to support the weight of the lens attached to the camera, allowing for a shake-free shot.

Components of the Rig:
-Adjustable Handgrips; allow to pan the camera and are equipped with buttons to control the camera.
-Camera Body Support; creates a stable support and absorbs vibration to give a shake-free result
-Fixed Plate and Variable Plates; attach the camera to the rig. Variable plate allows back and forth, up and down and sideways movement of the camera whereas the fixed plate only allows back and forth motion.
-Universal Mount; is a clamp that locks the position of different components that slide on the rails.