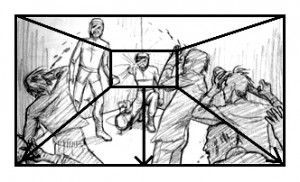 I had the pleasure of auditing a portion of the Videomaker Basics of Video Production workshop a couple weeks ago. There are many basic rules when it comes to video, and there is a wealth of basic knowledge that continues to be the foundation for great production. Though I had been exposed to all of this before, it had been years since I had seen the fundamentals of good video production laid out so methodically. It caused me to really think about the basics again.

As my experience has grown, I have developed a tendency to wing-it much more often than I would have when I was just starting out. The video portion of my scripts began to dwindle, and the fine details of the script were often left to be finalized on set. I was still proud of the final product, but as I sat in the workshop, I was reminded that proper planning, and a concise vision of what you want out of a given video project can really be the difference between good and great video production.

While there is no substitute for experience, remembering to follow those simple rules makes your chance of success so much higher, so write that script and edit it until it's perfect. Make that storyboard a true reflection of what you want to see in your video. Keep shooting takes until the shot is right. White balance properly for every shot. If you think there might be some distracting backround noise, do your best to minimize it on the set. Move the lights that extra inch to get it just right, and help your talent give the performance you know they're capable of, even if it feels exhausting at the time. Take your time, because what only takes a few seconds in the field, can take hours to fix in post-production. Doing all these things will make the the video production experience much more enjoyable for you and your crew, and it will show in the results.

Greg has 15 years of experience working with video professionally, and has recently joined the Videomaker team.