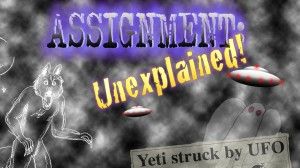 This week, we have another exciting video tidbit from the Videomaker community. Videomaker's Facebook friend Tim Heiderich is the brains behind the brand new Internet serial Assignment: Unexplained, an irreverent satire of paranormal reality television series like Ghost Hunters or Paranormal Cops. Goth/frat boy Chase Nightblood (Nate Scholz) has assembled a not-so-crack team of investigators to help him unravel the Fortean mysteries of aliens, chupacabras, and yetis. There's a somewhat shady pet psychic (Helene Udy) who always seems to be working her own scam, a gadget freak who sees sinister government conspiracies in everything (Owen Reynolds), and a random girl (Ashley Clements) that Chase is hoping to impress with his Bigfoot-finding prowess.

In the first season, the team interviews experts, gets lost in the woods, and does whatever it takes to prove to the world the truth about the mythical sasquatch. "The formula for ghost hunting shows was always the same," says Tim. "A group of amateur sleuths scaring themselves in the woods, at abandoned hospitals and dilapidated homes, and never, ever finding a shred of the paranormal. It's in the style of the successful Reno 911 TV show, and features a core group of improv actors, with a format designed to feature new and upcoming comedic talent. " Tim's been creating comedy videos for the web for a while, including hilarious horror spoof Normal Activity, but this is his first serial — and his most ambitious project to date. We like the show for a number of reasons.

With short episodes, sharp comedy, and easily accessible subject matter, Assignment: Unexplained is a great example of how to make videos for the web. Serious video creators will take note of the series' use of night shooting as the team wanders through the forest in search of monsters. It also shows how good a video can turn out with proper planning; the whole project hinged on extensive and meticulous pre-production planning, including seeking permission from the US Forest Service to shoot in state parks. [image:blog_post:12839]"Pre-production is the crucible that will determine whether you ever want to make another film," says Tim. "

Until you finally begin filming, pre-production is a house of cards you're waiting to see come tumbling down. For example: To get insurance, you must first know what equipment you're renting. But before you rent your equipment, you'll need to know which days you're filming. But you won't know which days you're filming until you secure a permit. But you can't get a permit if you don't already have insurance… and around it goes. During pre-production you have to juggle several things at once and work hard to make it all come together."

Although Tim's been working with video for years, he still learned a lot about how to successfully helm a big project while on set. He advised other video directors to keep in mind the importance of delegating tasks. It not only makes for less work for any one person, but will help you build a network of professionals who all share the same passion for the project that you do. He also encouraged directors to give real thought to their distribution model before they take the plunge into creating a video series. "Before you shoot, have a distribution plan: where will your series air?" says Tim. " How often will new episodes come out? How will you spread the word and drive interest to your site? Will you submit to festivals? Who's going to do that job?

Without a distribution plan, you'll have just made a very expensive home movie." You can see more videos at Assignment: Unexplained. You can also find follow it on Twitter @AssUnexplained and Facebook at www.facebook.com/AssignmentUnexplained.

As an up-and-coming director, you jump at the opportunity to direct your first feature film. When you get your hands on a script being...