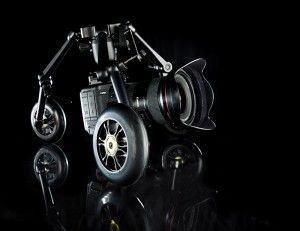 Or on the ground in this case. Paul Jackson has introduced a new product on Kickstarter he's calling the ZipShooter. It's looks kind of like a mini-tripod with wheels, but in this case, the legs are jointed, and the ball -head is reversible, and able to hang from underneath the dolly (or maybe it's the legs that bend backwards. These types of surface dollies are nothing terribly new, but the versatility of this device looks extremely useful. http://vimeo.com/42990001

Not long ago, we built our own tabletop dolly, but as is the case with most do-it-yourself builds, the professionally built version looks like it's going to be a better option. With our build, the limitations were the fixed height of the unit, the inability to tilt the camera (although a fix could probably be done), and the fact that making adjustments to the proportional angle of the axles was difficult.

The ZipShooter looks to have no problems with any of these issues. The major limitation of these types of dollies is that they're so short and require a smooth surface. In the demo video posted on Kickstarter, they solved problem of requiring a smooth surface by rolling the ZipShooter along a large flat piece of wood–a cost effective solution indeed. Similarly, that same surface could be placed across two tripods (or a tripod and a similarly tall object) to achieve shots with a little more elevation.

Something I'd love to see with these types of dollies is an extended handle so that it could be used from a standing position. Imagine pushing this thing like a lawn mower! Some of the most interesting surface dolly shots I've seen were shots taken while the camera was moving pretty quickly. If you could push or pull this thing while running, you could get some really slick looking footage!

The ZipShooter is aiming to raise $25,000 on Kickstarter, and as of the time of this posting, they're sitting at a little over $4,000.