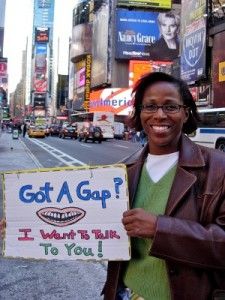 We've often talked about documentary video on this site and the one thing that we've stressed time and again is that a documentary topic does not need to be "big" to be good. Many readers look at documentaries like Ken Burns' Civil War and assume that all documentaries need to be similarly epic sagas. But sometimes smaller stories have even more potential to really speak to people. For example, take Cassi Glisper's Next Tooth One Mile, a documentary about what it's like to live with a gap between your front teeth.

Cassi, an independent filmmaker with a decade of experience in short films, hit on the idea when she started doing research into dental options for her own gap. She'd lived her whole life hating her gap, but it was only when she decided to fix it that she really started thinking about what a gap represented. It's an intriguing idea for a movie. And one that could grab the interest of any viewer—I don't have a gap myself, but, having some crooked snaggleteeth, I was immediately eager to hear what people would say to Cassi.

In some ways, it's a perfect documentary subject because it's something you hardly even think about until someone pointed it out. Audiences have agreed, and the film took home honors at the 2009 International Film Festival Ireland and the 2010 Swansea Bay Film Festival in Wales. "I planned interview sessions in public areas around the country with the intention to get as many perspectives and insight into the world of gappers," said Cassi. "I knew that meeting real people and hearing of their human experience would shape the outline for the film," said Cassi. "On weekends, I would hit the street with my video camera, a friend, and a small sign that read, 'Got a gap, I want talk to you.' While out, I looked at the mouths of those passing by. If they had a gap, I would ask if I could interview them for my documentary. Ninety-eight percent of those I asked agreed to be interviewed. I confess that New Yorkers were my toughest audience."

Cassi's interviews turned up some surprising results. While she had assumed that most people would hate their gaps, she found that about half of her respondents actually enjoyed having gap teeth. Most people would laugh at first when she explained her project, but quickly became excited at the chance to share their story. She interviewed gappers across the United States in California, Wisconsin, Michigan, New York, and Georgia, as well as overseas while on vacation in France and Kenya.

[image:blog_post:12797] "Gappers in the United Stated had varying opinions about their gaps," said Cassi. "Some felt that society thought they were from a poorer class because they didnt get their gap closed. Others felt that their gap gave them a unique look, and they liked looking different—not like everyone else. But in Africa, having a gap is a BEAUTIFUL thing. Those with gaps are considered lucky. There are some people who try to drill a space between their teeth so that they can join this lucky group of gappers." One of the trickiest aspects of a documentary is always the man-on-the-street interview.

It's relatively easy to get a person to speak with you when you've arranged an interview in advance—ld show them a picture of herself before she had her own gap fixed. This made them more comfortable with me. Most gap-toothed Americans could relate to her ambivalent feelings about her own gap, but the reaction was very different when she showed her old photos to people in Kenya. "They couldn't believe that I closed it," said Cassi. "I remember one guy in particular saying, 'Cassi, why did you do it? Why did you close the gap? It was beautiful! You could marry a great guy here.' "

After completing Next Tooth One Mile, Cassi is working on a feature script, entitled Rice & Gravy, about a friendship between two 13-year-old loners—a third generation Japanese American girl who moves to the deep south from California after her grandparents' experience in a WWII Japanese interment camp and an African American girl from a long line of southerners.