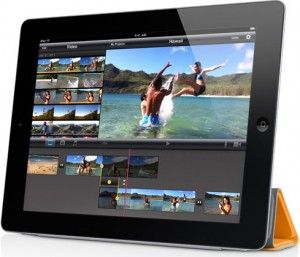 Video making has never been more accessible than in todays mobile world. Almost every digital device, from music players to smart phones, can shoot video. With the increase in video capture, we have also seen a growth in video editing software, especially for mobile devices.We took a walk around the Internet and found quite a few video editing apps.

Apple just came out the new iMovieapp for the iPad, which is armed with quite a few interesting tricks. It has Trailer Templates, from every genre of film; it allows you to drag and drop your video into the template, creating a cinema trailer effect with your home videos. It also allows you to shoot with one Apple device and edit with the other (shoot your Bahamas vacation on your iPhone and edit on your iPad for example) and it also has many themes to choose from for longer movies.

Avid Studio is also out there for the iPad, and although it has many of the same qualities of the iMovie (templates and editing capabilities). iMovie and Avid Studio can both be found on the Apple website and both apps cost $4.99. Another iPad compatible editing software is Movie Looks HD. It supports portrait video and has editing templates that help create the same classic movie looks. The downside to this app is that it only supports video that is less than five minutes long. Its a fun editing application for very short films. Movie Looks HD is $1.99 in the Apple Store.

If youre looking for something for your Android, unfortunately the pool is still a little shallow. AndroMedia is a free application with basic editing software and web share capable. You can put in your own titles and transitions, but the editing part of the application is fairly limited. Apps such as USTREAM Everywhere and Viddy are both free apps as well, but are mainly for video sharing. USTREAM Everywhere does not have an editing capability and although Viddy does, it can only support 15 seconds of video at a time. Many of the applications are limited based on the mobile devices storage capability, though some of the ones we found used Cloud technology.

In the Android market, Clesh Video Editor is one such app, and has all of the things an editor on the go needs: full timeline and storyboard editing, pan and zoom, titling, transitions etc. Clesh also allows you to access your videos from any PC device. It boasts its no wait rendering play back, but although it saves your edited videos onto your device, it only has 30 minutes of storage in the Cloud. Clesh Video Editor goes for $4.99 on Google Play. If you are a hardcore video editor, meticulously spending hours on your videos for the perfect, custom made look, than mobile editing is probably not for you. But for those of you who enjoy editing on the road, we hope that we have given you some insight into your choices. Five dollars may seem like a lot for a mobile app, and we understand that nowadays everyone is trying to save, but in this area, less is not necessarily more. The more you are willing to spend, the better your video making results are going to be. Besides, if you can spend five dollars on a burger and fries, you can spend it on a video-editing application. So go, pack your bag lunch, and treat yourself to some mobile editing software.

Beata Dumaplin is a freelance writer and an independent photographer.