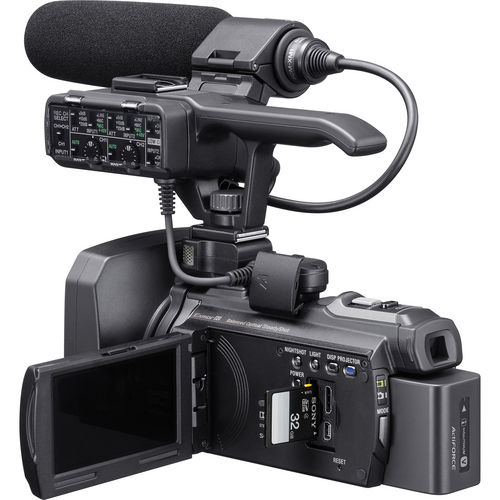 Who says a professional camera can't fit in your hand? Sony's HXR-NX30U is a new image shattering camera that takes professional features and contains them in a compact, versatile form. Our critieria for dividing professional from consumer cameras include image sensor size, outputs, and whether or not it has XLR inputs. This camera exceeds these marks with a large 1/2.88-inch Exmor R CMOS sensor, HDMI mini out, and two detachable XLR inputs. Now cram in two more features that could represent entire pieces of equipment – a camera stabilizer and monitor.

We liked how effective the Balanced Optical SteadyShot was at CES 2012, so when added to a handheld pro camera, it makes a lot of sense. Now, you can get as big an LCD screen as you want, it won't beat 100 inches as projected onto a flat surface (at 16 feet.) The Carl Zeiss lens cuts down on rolling shutter artifacts while the range of frame rates are 60p, 60i, 30p, and 24p all at HD quality. Recording AVCHD with 96GB internal memory should make the job enjoyable as will the versatility of using either SD or Memory Stick cards. The detachable XLR inputs are really a feature to behold as you'll be able to capture high quality sound and have one of the biggest defining factors that separate videos. There is also an option for Linear PCM audio recording. A nice touch is being able to really control the time code as well.

[image:blog_post:12935] Now, what will your clients think when you pull this camera out of your bag – remember, you can also use your highest quality mics too. You may need to project the confidence that comes with having your stabilizer and projector combined in one device, it probably won't hurt to be able to show them some sample footage with camera movement and presented via the projector.