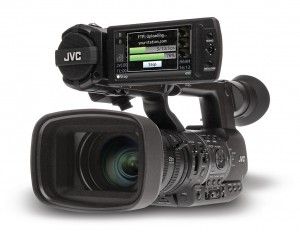 [image:blog_post:12897] This ProHD camera features a 23x zoom lens and combines it with great low-light performance. The GY-HM600 ($4,700) goes for versatility by working in multiple file formats like XDCAM EX and Final Cut Pro (MP4 and MOV respectively.) It will make use of SD cards and can relay them for continuous recording even after they fill up. A second function here is to simultaneously record to multiple cards so as to provide a client with an on the spot copy or give yourself a backup.

[image:blog_post:12898] Viewfinders with 1.2MP color and 3.5-inch LCDs make for clean monitoring in most situations. The built in handle has a trigger and servo zoom control, and if that's not enough to get you to shoot while holding the handle consider the Pre Rec feature that continuously records and stores a max. of five seconds to help cover the head or tail of a shot that you missed. The GY-HM600 is rounded out with three 1/3-inch 12-bit CMOS sensors and a Fujinon 29-667mm lens, three built-in ND filters, two XLR inputs, and one input for a wireless receiver.

[image:blog_post:12899] GY-HM650 ($5,700) seems accurately touted as a mobile news camera. Video can be set to record to two codecs, one at full HD and a second at 1/4 HD for the Internet. By the way, if the camera could talk it'd mention that it's got built-in FTP and Wi-Fi so no more running back to the news station just to drop in footage – no satellite or microwave connection needed. Much like the HM600, we see a Fujinon 29-667mm lens with zoom as long as 23x. This also gives it good light sensitivity, F11 at 2000lx.

These two cameras also share resolutions at 1920×1080, HD-SDI and HDMI outputs. The same mic input compliment puts the similarities to rest, the main difference is the connection to the Internet and $1,000. The GY-HM650 is also available a few months later than the GY-HM600 which will debut in Fall 2012. As promised, the news on the GY-HMQ10 is that, it's shipping – as of today!