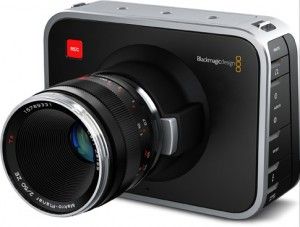 Blackmagic Design does a lot of things well, and the Blackmagic Cinema Camera is going to join the compliment of mixing software, 3D processors, hubs, and converters as another fine product. The quality of this high-end camera is in the compliment of Canon's EF-mount and Zeiss ZF lenses, 2.5K (2592×2192) resolution and uncompressed file formats. The form is strangely similar to other Blackmagic Design products with solid, rounded edges forming a sort of DSLR prism. Or you could say it appears similar to an external SSD, but wait, that's it, the Blackmagic Cinema Camera records directly to SSD!

The 5-inch touch LCD screen takes on a bulk of your usage since the external buttons are minimal. The sides of the camera house the removable SSD and the assortment of connections for the likes of an external mic, headphones and Thunderbolt. [image:blog_post:12906] The SSD gathers video in the form of open standard CinemaDNG RAW, DNxHD or ProRes. The video playback uses SDI which also holds lots of camera data including transport control, shutter angle and color temperature. The metadata entry is similar to the method found in smartphones, and will make searching for files easier in post.

During shooting, bring along your laptop with Thunderbolt and you'll have yourself a monitor with UltraScope which brings to you waveform, vectorscope and histogram among others. There are strong visuals to be made with 13 stops of dynamic range and 12-bit RAW. There are equally strong sounds to be captured with two 1/4-inch mic inputs. The battery is integrated and there are three 1/4-inch threaded mounts on top of the camera.

[image:blog_post:12907] No camera does a complete job without editing software, so Blackmagic includes DaVinci Resolve 9.0, so color correction will be a tool you'll want to use. We're excited to see the Blackmagic Cinema Camera at work, and for $3,000, this will be a huge addition to the cinema marketplace. It is set to ship in July, with optional grip handles for $195.

Please discuss this camera in the Videomaker forums… [image:blog_post:12908]