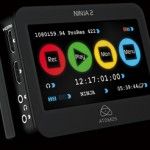 If you recall our blog post from March 26, you may remember James Cameron going to the deepest part of the Pacific Ocean, what we didn't realize until recently is that in order to record footage, the Atomos Ninja 2's larger relative, Samurai was on board. It was actually at least 30 Samurai, chosen for their combination of size, durability, and continuous battery power that made it the video recorder of choice for use 6.8mi. below sea level. Atomos was able to modify all the recorders to be operable from a single computer.

These modifications found their way into AtomOS 3.0 and are now known as SmartControl, ultimately it gives camera operators the ability to record and pause recording, which may not sound like much control, but it worked for Cameron when he was cramped into a 43-inch wide cockpit. [image:blog_post:12895] There is now little difference between the Samurai and Ninja 2 since the HD-SDI output is found on both, the Ninja 2 makes do with its HDMI in and loop-through.

Updated in the Ninja 2 are some smart features as part of AtomOS 3.0, namely, SmartLog and SmartMonitor. The no cost firmware update will be made available for current Ninja owners and should be availabe April 30. SmartLog allows for marking of the good, the bad and the ins and outs. The SmartMonitor provides zebra, blue-only, false color and focus peaking. Physically, the Ninja 2 gets the upgrade to 800×480 with a 170-degreee viewing angle. The Ninja 2 also has better visibility in sunlight.

It is worth mentioning that the Ninja 2 does not gain anything in terms of cost – still $995 returns many of the great features from the first model, including recording uncompressed 10-bit Apple ProRes, and now Avid's DNxHD.

It'll be exciting to see where the Ninja appears next, if it will expand to support even more codecs, but one place we'll expect to find it is on top of a new DSLR. Please discuss in the Videomaker forums